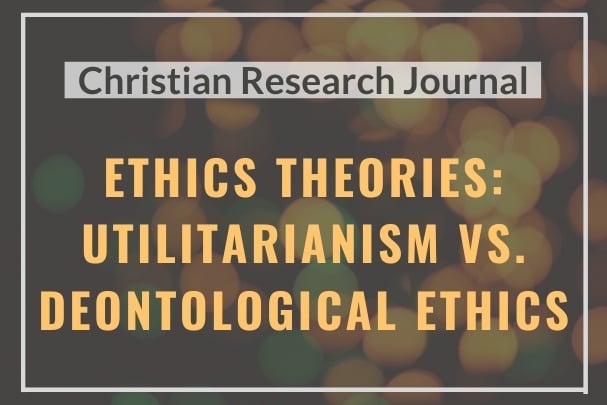 The following is an excerpt from article DE197-1 from the Christian Research Institute. The full pdf can be viewed by clicking here.

There are two major ethics theories that attempt to specify and justify moral rules and principles: utilitarianism and deontological ethics. Utilitarianism (also called consequentialism) is a moral theory developed and refined in the modern world in the writings of Jeremy Bentham (1748-1832) and John Stuart Mill (1806-1873).

There are several varieties of utilitarianism. But basically, a utilitarian approach to morality implies that no moral act (e.g., an act of stealing) or rule (e.g., “Keep your promises”) is intrinsically right or wrong. Rather, the rightness or wrongness of an act or rule is solely a matter of the overall nonmoral good (e.g., pleasure, happiness, health, knowledge, or satisfaction of individual desire) produced in the consequences of doing that act or following that rule. In sum, according to utilitarianism, morality is a matter of the nonmoral good produced that results from moral actions and rules, and moral duty is instrumental, not intrinsic. Morality is a means to some other end; it is in no way an end in itself.

Space does not allow for a detailed critique of utilitarianism here. Suffice it to say that the majority of moral philosophers and theologians have found it defective. One main problem is that utilitarianism, if adopted, justifies as morally appropriate things that are clearly immoral. For example, utilitarianism can be used to justify punishing an innocent man or enslaving a small group of people if such acts produce a maximization of consequences. But these acts are clearly immoral regardless of how fruitful they might be for the greatest number.

For this and other reasons, many thinkers have advocated a second type of moral theory, deontological ethics. Deontological ethics is in keeping with Scripture, natural moral law, and intuitions from common sense. The word “deontological” comes from the Greek word deon which means “binding duty.”

Deontological ethics has at least three important features. First, duty should be done for duty’s sake. The rightness or wrongness of an act or rule is, at least in part, a matter of the intrinsic moral features of that kind of act or rule. For example, acts of lying, promise breaking, or murder are intrinsically wrong and we have a duty not to do these things.

Second, humans should be treated as objects of intrinsic moral value; that is, as ends in themselves and never as a mere means to some other end (say, overall happiness or welfare). As we will see in Part Two, this notion is very difficult to justify if one abandons the theological doctrine of man being made in the image of God. Nevertheless, justified or unjustified, deontological ethics imply that humans are ends in themselves with intrinsic value.

Third, a moral principle is a categorical imperative that is universalizable; that is, it must be applicable for everyone who is in the same moral situation. Moral statements do not say, “If you want to maximize pleasure vs. pain in this instance, then do such and such.” Rather, moral statements are imperatives or commands that hold for all examples of the type of act in consideration, such as truth telling. Moral statements say, “keep your promises,” “do not murder,” and so forth.