Is The Benedict Option a Live Option? 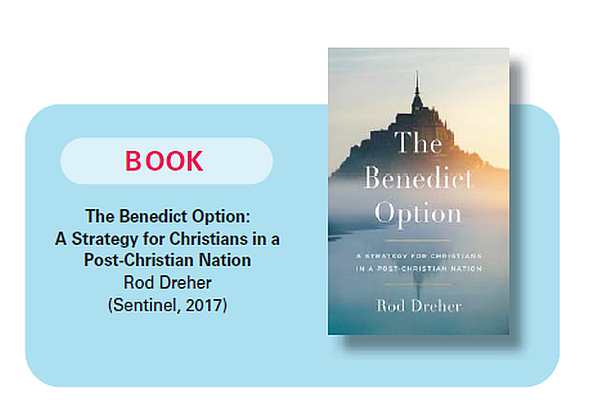 A Strategy for Christians in a Post-Christian Nation

A year or so ago, I heard people bandying about the phrase “the Benedict Option,” but I had no idea what it was. When out of curiosity I looked into it a bit, I was pretty strongly opposed to it. Why would followers of Christ choose to withdraw from culture, especially at a time such as this? What I was opposed to, however, was a mere caricature of Rod Dreher’s actual proposal in his recent book, The Benedict Option: A Strategy for Christians in a Post-Christian Nation.

What exactly is the Benedict Option? A reading of several reviews of the book might leave one confused about the answer to this question. Dreher offers a short online primer about what it is.1 In short, the book includes a call for Christians to consider withdrawing from some aspects of, and strategies for engaging, American culture, such as seeking change through the means of political power.

A disproportionate amount of attention has been given to what I take to be the lesser part of The Benedict Option, namely, this call for Christians to withdraw from some aspects of culture. What I came away with after reading the book was a renewed sense that the church needs to redouble its efforts to be the church, both individually and corporately. The primary call of The Benedict Option is for Christians to form vibrant spiritual communities, where the members practice spiritual disciplines alone and together that unite us to and in Christ. This includes a rejection of the aspects of modern culture that are harmful, such as materialism, consumerism, and hedonism. This has always been a challenge for Christians, as every culture is fallen. In that sense, the challenge of our age is the same as that of every other.

Appropriately Alarmist? Others, however, have seen the book in a very different light. In some cases, it seems to me that they either haven’t actually read the book (at least not closely) or they have let their disagreement about some part of it cloud their judgment concerning the content of the whole.

Many assert that Dreher is arguing for things that he simply is not arguing for in this book. One reviewer rejects what she takes Dreher to be calling for — escape and retreat from culture and society — and characterizes the book as a “virtue-signaling, isolationist tire fire.”2 This is simply a false characterization of what Dreher is recommending.

Another criticism leveled against the book is that it is overly alarmist.3 To an extent, this may be right. It is not at all clear that Dreher is correct when he claims that Christianity will disappear from Europe and North America, while flourishing in the Global South and China. Others have offered good reasons for thinking that perhaps the crisis is not as dire as Dreher describes it.4 And yet I see why Dreher is concerned. Given the way that some seek to employ political and social power rather than persuasive rational argument, I think Dreher may be right that a day could come when a physician will not be licensed unless she agrees to perform abortions. And for Christians who are convinced that this is wrong, what else could they do but retreat from that profession? The diminishing concern for character and integrity across much of the social and political landscape in the United States should give us all reason for concern about what the future may hold.

The heart of the book is not about escaping culture; rather, it focuses on the fact that the local church should be a community of individuals who love, care for, and support one another in their daily lives. Many Christians, especially in America, have for far too long ignored the classic disciplines of spiritual growth that Dreher discusses in Chapter 3 (e.g., prayer, asceticism, stability, community, and hospitality). The focus of the book that all believers should be able to agree on includes the revitalization of our churches through a focus on the classical spiritual disciplines of the church, building community among members outside of Sunday morning, equipping our children in the faith, and valuing relationships in the home and with other believers. I would add, and I think Dreher would agree, that we must find ways to love our neighbors, all of our neighbors, as ourselves. In some cases, this may require withdrawing from some realms of society and surely from some aspects of popular culture. For example, we must not participate in industries or practices that exploit human beings or the rest of creation, such as pornography or mountaintop removal mining. We can engage the culture via our opposition to such practices, but as Christians, we should not participate in them.

The heart of the book, in my estimation, is a live option for all Christians. I do have a few points of contention with Dreher, however.

As Best We Can. Some have criticized The Benedict Option as an option only for those Christians who are sufficiently well off to worry about such things and withdraw their children from public school, for example. I think there is something to this, insofar as some of these choices are not live options for those who are poor. How might a poor single mother in rural Appalachia homeschool her children? How would any family of any ethnicity be able to do this if both parents need to work to make ends meet? I would hasten to add that the African-American church has a better track record of playing a countercultural role in the United States than many other segments of the church in this country. Those of us who enjoy the advantages that being white and wealthy bring have much to learn from our brothers and sisters about this.

Dreher calls for many to opt for a classical Christian education rather than making use of the public school system. My wife and I have always preferred the public schools where we live, whenever possible. We considered homeschooling at one point, primarily because of the quality of education rather than the moral issues raised by Dreher. On this issue, as a side note, it would be helpful if Christian parents stopped generalizing from their own experience. In some places, homeschooling may be the best option, depending on the capabilities of family members and the individual needs of children as well as the quality of the schools in the community. For others, public school or Christian school is best. But those who think that only one of these options is the best option for all Christian families are simply presumptuous. It would be better if we would all figure out what works best for our family, and let others do the same.

Retreat or Revive? I see some of the troubling trends that lead Dreher and others to call for certain forms of withdrawal from the culture, including materialism, consumerism, and much of the entertainment industry. The church, the ekklesia, means “called out ones.” In every culture, there will be realms that Christians must absolutely avoid and resist. We will not always agree on what should be avoided and what should be engaged for redemptive purposes. Some things simply are irredeemable (e.g., the pornography industry) while others can be changed for the better (e.g., the energy industry).

Even so, I think we may still be able to revive American culture in important ways. This does not mean Christianizing the United States, or seeking the institution of some sort of Christendom as dominionists hope to do. I believe that the aim of the church should be a just state rather than a Christian state. We should also work toward creating a culture in which Christianity exists as one plausible and live option at the pluralistic table of ideas in politics, education, and the culture more broadly. This is already occurring in my own discipline, philosophy, as there has been a widely recognized renaissance in Christian philosophy over the past fifty years or so.5 The discipline is not “Christianized,” but there are top-notch thinkers who, through their work as professional philosophers, have shown that Christianity is a live option for thoughtful people in the twenty-first century. My hope is that this would continue to spread beyond the world of philosophy, counteracting the intellectually immature atheism of the New Atheists as well as engaging in more depth those who are intellectually sophisticated atheists. As it does so, the sentiments expressed by many people in our culture concerning why they reject Christianity (it is anti-science, irrational, etc.) will no longer be granted the status of claims without need of an argument. The replies to such claims are out there in the academic literature, and many are making them available in more popular venues. This is the kind of engagement we need. So at least some of us must not withdraw from the public educational institutions in our culture. We are still recovering from the cultural withdrawal that many Christians made at the start of the twentieth century. We should not repeat the mistakes of the past.

Finally, we should reject the call of many to put on the armor of culture warriors. This is a mistaken paradigm of Christian cultural, social, and political engagement. After all, we are not at war with flesh and blood, and those who disagree with us morally, politically, and religiously are not enemies to be conquered in battle (Eph. 6:10–20). Instead, we should aim at finding common ground. For example, consider the “unlikely” friendship of Barry Corey, president of Biola University, an evangelical Christian school in La Mirada, California, and Evan Low, a member of the California Assembly and Chair of the LGBT Caucus.6 They started out as opponents, but by engaging with one another, listening to each other, and breaking bread together, they ultimately found places where their interests overlap in the midst of their disagreements on key issues. There is common ground to be had, even between those who at first seem too divided to work together. Let’s meet each other on that ground in a spirit of mutual respect and concern for the common good, and go from there.

I would recommend reading and reflecting on The Benedict Option. Whatever one makes of the entirety of the book, there are challenging and important points within it that Christians would do well to consider. As we inhabit an increasingly post-Christian culture, let us seek to form communities that exemplify the best of what it means to be human and Christian, together.