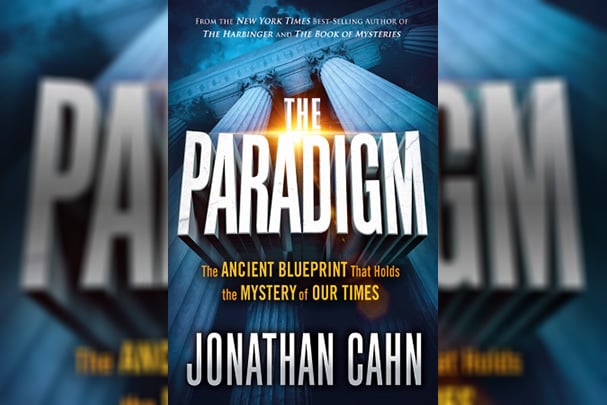 The Paradigm:
The Ancient Blueprint That Holds the Mystery of Our Times
by Jonathan Cahn

Jonathan Cahn is not shy about positioning himself as a modern-day prophetic voice. Within the last few years, he has authored two works — The Harbinger (Frontline, 2011) and The Mystery of the Shemitah (Frontline, 2014) — in which he hinted that America was on the brink of a great financial catastrophe. However, he was circumspect when it came to the details of his declarations about the future, and his willingness to stake out a reputation as a prophet manifestly ends at the point where the present ends and the future begins.

In his latest work, The Paradigm: The Ancient Blueprint That Holds the Mystery of Our Times (Front Line, 2017), Cahn continues his tradition of declaring in great detail the prophetic significance of past events and stopping abruptly short with details at the line of demarcation predicting the future. He also continues his tradition, seen in his prior books, of relying on generous semantic expansions to draw unrealistic and far-fetched parallels between past biblical events and present-day historical events.1

A Paradigm of Parallels. In The Paradigm, Cahn’s efforts are exerted toward finding parallels between events surrounding biblical figures in the book of 2 Kings and events surrounding modern-day American political figures. According to Cahn, former president Bill Clinton and former first lady Hillary Clinton have re-enacted events surrounding Israel’s King Ahab and Queen Jezebel, former president Barack Obama has re-enacted the part of Ahab’s son Joram, current president Donald Trump has fulfilled the role of Israel’s King Jehu, and Cahn himself has taken on (without the least hint of embarrassment) the role of the prophet Elijah (p. 232). Meanwhile, behind the scenes of these figures, America has taken a downward moral and spiritual trajectory that parallels that of Israel in Ahab’s time.

When it comes to the parallels Cahn draws, however, the effect is much like that of an examination of an impressionist painting; the parallels look convincing from a distance, but as the observer gets closer, the parallels dissipate into a vague mist. For example, Cahn draws a parallel between the ancient practice of sacrificing children to Baal and the modern practice of abortion (16). While both practices rightly evoke outrage among Christians, it is absurd for Cahn to draw a parallel between them. The victims are different: Abortion kills the unborn, whereas human sacrifice victims ranged in age from infants to the fully grown. More significantly, the purposes are different:  Human sacrifice was performed for religious devotion, whereas abortions are performed for the sake of convenience, alleged hardship, and occasionally, to preserve the life of the adult mother. Ignoring these important distinctions, Cahn classifies both practices under the vaguer and more generalized phrases “killing of children” and “murder of the innocent” in order to manufacture a parallel. However, despite the awkward terminology of a few abortion advocates who describe abortion as a “sacrament” or using other religious terms (17), there is no religious component to the modern practice of abortion.

Ahab Redivivus? Other claimed parallels are no more convincing when examined closely, and Cahn frequently forges a parallel by making wide-ranging declarations without providing any factual support. For example, to tie Bill Clinton’s activities to Ahab’s, Cahn refers to the “scandal” of Ahab’s theft of Naboth’s vineyard (1 Kings 21). Cahn states that the Clinton presidency was known for scandals, “one right after the other” (69). However, in the context of that accusation, he refers to only two scandals in the eight years of the Clinton presidency: (1) Whitewater and (2) the death of Clinton associate Vince Foster. Neither of those scandals in any way implicated the Clintons of wrongdoing, as Cahn admits. This is in sharp contrast to Ahab, who was the driving force behind Naboth’s murder. On the other hand, Cahn does not mention, in this context, the signature scandal of the Clinton administration, which was Bill Clinton’s affair with Monica Lewinsky. Why not? Because Cahn’s purpose is to draw questionable parallels between, respectively, Naboth’s vineyard and the Whitewater real estate dealings and the deaths of Naboth and Foster. The Lewinsky scandal would obviously be of no use to Cahn because, for all his faults, one thing King Ahab most likely did not do was cheat on his wife.

Cahn also yet again resorts to the use of vague terminology to make unlike events sound alike. Should it not make a difference that Naboth’s death was effectively a murder, while Foster’s was a suicide? For the parallel to be valid, should not Foster have been killed so that the Clintons could take possession of Whitewater-related property owned by Foster.2

Caught-22. Cahn also freely manipulates the data when it suits his purposes. He asserts that Bill Clinton and Ahab both reigned for twenty-two years (57; cf. 1 Kings 16:29) and presents this as strong evidence of a divine paradigm. However, to make Clinton’s career add up to twenty-two years, Cahn must start the clock at 1979, when Clinton was first elected governor of Arkansas, and then reach twenty-two with the last year Clinton served as president (2001). Cahn fails to mention that Clinton did not serve as governor of Arkansas between 1981 and 1983, which reduces his terms of office as governor to twenty years. Cahn attempts to erase this problem by classifying Clinton’s twenty-two years as the time he was “on America’s national stage,” or the time of his “political career.” Even these classifications are strained; Clinton was not “on America’s national stage” as governor of Arkansas (until he started running for president), and his “political career” started in 1974 when he first ran for the United States House of Representatives.

Many more examples of semantic equivocation and manipulation by Cahn could be offered. Some of his efforts verge on the comical. He refers to the following as, “The Paradigm of the Race”(158–59): “Jehu mounted his chariot and raced to the king’s palace….So Donald Trump would begin a race to the White House, the American throne.” This parallel entirely depends on the specific usages of the modern English word race, as it has evolved to refer literally to movement with speed as well as figuratively to nonphysical competitions like elections. The events themselves are entirely unlike one another.

Engaging Parallelomania? Despite the farfetched attempts to force matches between unlike events, it might be objected that Cahn’s methodology is no different than that of the authors of the New Testament, who drew their own parallels between events in their time and events recorded in the Old Testament. For example, several New Testament authors compared Jesus to the Passover Lamb of Exodus (John 1:29; 1 Cor. 5:7-8; 1 Pet. 1:19). In such comparisons, the Passover Lamb is regarded as a “type” and Jesus is regarded as a fulfillment of that type.

To be sure, New Testament authors sought many such parallels between events in their time and events in the Old Testament period. Some of those parallels were even intentionally enacted. Jesus’ feeding of thousands of people with a few loaves of bread and some fish (Matt. 14:13–21; Mark 6:31–44; Luke 9:12–17; John 6:1–14) was clearly meant to echo Elisha’s feeding of one hundred men with twenty loaves of barley and some grain (2 Kings 4:42–44). It was also clearly an intentional act by Jesus to imitate, and supersede, Elisha’s act, and show that he was greater than Elisha.  In that instance, Elisha was the type, and Jesus fulfilled that type.

Cahn’s adoption of this methodology, however, is inappropriate. The Old Testament types that were fulfilled in the New Testament era found their fulfillment in Christ. At the very least, it is presumptuous for Cahn to claim that God has specially instituted another round of types that had their fulfillments in modern times. Cahn arrogates to himself and to modern America a unique place in God’s economy that equates himself with a prophet, and America with Israel’s covenantal theocracy. The historical and evidential grounding for a unique station for himself, and for America, is dubious at best and self-serving at worst.3

The Last Trump? Given that Cahn matches Jehu with Donald Trump, does he worry that we will start to see America’s enemies taking territorial bites out of America (cf. 2 Kings 10:32)? No, he only refers vaguely to “national judgment” and being wiped off the face of the Earth (219). This is in sharp contrast to the detailed predictions offered by biblical prophets like Daniel, who foretold of specific empires for hundreds of years to come, or other biblical prophets who named specific enemies of the Jews, such as Babylon or Assyria, who would be the instruments of God’s judgment.

According to the flyleaf of The Paradigm, Cahn “has been called the prophetic voice of our generation.” Given the many semantic equivocations and manipulations Cahn engages, one can only wonder whether Cahn indeed deserves the mantle of a prophet. Either that, or the office of prophet has taken a decided turn for the worse in terms of quality control since the biblical era. —James Patrick Holding