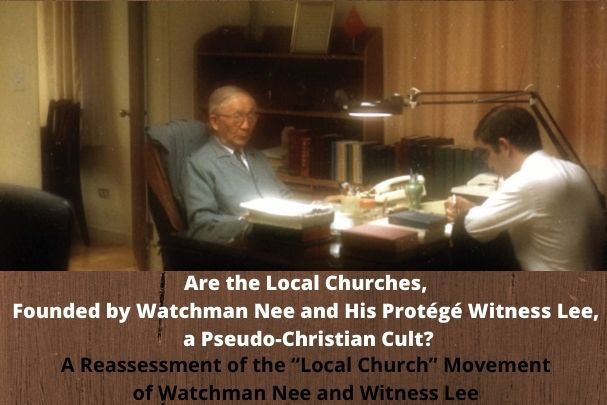 On the basis of a six-year primary research project represented in part in this Special Edition of the JOURNAL, the Christian Research Institute has concluded that the local churches are a genuine expression of authentic New Testament Christianity.

To begin with, the local churches are not a cult from a theological perspective. In this sense, a cult may be defined as a pseudo-Christian organization that claims to be Christian but outright denies essential Christian doctrine. While I personally have differences with the local churches when it comes to secondary issues, such as the timing of the tribulation or the meaning of the millennium, I stand shoulder to shoulder with the local churches when it comes to the essentials that define biblical orthodoxy. With respect to the Trinity, for example, we are united in the reality that there is one God revealed in three persons who are eternally distinct. Although we may disagree on the exegesis of particular passages, this premise is inviolate. Moreover, it is significant to note that in interacting with members of the local churches over a protracted period of time, I have witnessed in them a keen interest in doctrinal precision sadly missing in major segments of the evangelical community.

Furthermore, the local churches are not a cult from a sociological perspective. In this sense, a cult is a religious or semireligious sect whose followers are controlled by strong leadership in virtually every dimension of their lives. Devotees characteristically manifest a displaced loyalty for the “guru” and the group and are galvanized together through physical and/or psychological intimidation tactics. It is unconscionable that the local churches have been uncharitably lumped together with sociological cults involved in the most heinous activities conceivable. Indeed, it is tragic that this classification has been used to persecute and imprison members of the local churches in various regions around the world.

Finally, the local churches are an authentic expression of New Testament Christianity. Moreover, as a group forged in the cauldron of persecution, it has much to offer Western Christianity. In this respect three things immediately come to mind.

First is their practice of prophesying—not in the sense of foretelling the future but in the 1 Corinthians 14 sense of exhorting, edifying, encouraging, educating, equipping, and explicating Scripture. As such, constituents are corporately involved in worship through the Word. Second is their practice of pray-reading as a meaningful link between the intake of Scripture and efficacious communion with God in prayer. And third is their fervent commitment to the Great Commission (Matt. 28:19).

If the early Christian church had one distinguishing characteristic, it was their passion to communicate the love, joy, and peace that only Jesus Christ can bring to the human heart. As we become entrenched in an age of esotericism, it is essential that genuine believers in all walks of life emulate this passion—a passion I have personally witnessed as I shared fellowship with brothers and sisters in Christ from local churches in such faraway cities as Taipei, Seoul, and Nanjing.

In sum, along with Christians from a broad range of persuasions, the local churches are dedicated to both proper doctrine (orthodoxy) and proper practice (orthopraxy). As such, we march together by the maxim, “In essentials unity, in non-essentials liberty, and in all things charity.” While we will continue to debate secondary issues this side of the veil, I have no doubt that we will spend an eternity together growing in the knowledge of the One who saved us by grace alone, through faith alone, on account of Christ alone.—Hank Hanegraaff