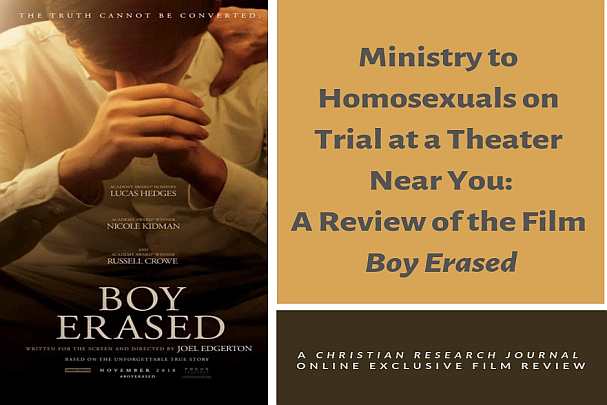 Ministry to Homosexuals on Trial at a Theater Near You:

A Review of the Film Boy Erased

The 1982 film Frances was a harrowing account of actress Frances Farmer’s ordeal in the 1940s when she was diagnosed with schizophrenia, then institutionalized against her will.[1] During her hospitalization, the movie shows her raped, subjected to shock treatments, and finally lobotomized.

As the film closes, an interesting notice appears before the closing credits:

“Since the 1940s there have been major advances in the care and treatment of the mentally ill. The reprehensible conditions experienced by Frances Farmer are not typical of mental health treatment today.”[2]

Would that Joel Edgerton, the screenwriter and director of the recently released movie Boy Erased[3] had shown similar fairness. His film, like Frances, follows one person’s ordeal when coerced into a facility employing questionable methods. This time, the facility in question is Love in Action, a now defunct Memphis ministry that, for decades, served people wanting to overcome homosexuality.

Based on Garrard Conley’s autobiography of the same title,[4] Boy Erased is Conley’s account of the two weeks he spent in 2004 at the Love in Action Refuge program, which required him to attend daily group sessions and activities under rigid supervision and a plethora of rules covering conduct, dress, reading materials, and outside contacts.

The teachings and policies of the program can be verified by its printed materials, which are now archived at the Smithsonian Institute.[5] But what actually did or did not happen at Love in Action when Conley attended it is unverifiable, as is the accuracy of his account.

Compounding the problem is his current status as an openly gay journalist committed to ending what’s often called Conversion Therapy.[6] His legitimate criticisms should be considered; his mission and the political and social context this film has been released in have to be considered as well.

The film does feature memorable performances by Russell Crowe as Conley’s controlling Baptist minister father, Nicole Kidman as his more sympathetic and doting mother, and Lucas Hedges as Conley. Wherever one stands on the question of homosexuality and faith, it’s hard not to appreciate how well acted and compelling Boy Erased is. It’s certain to get some nods come Oscar time.

But believers who are concerned about ministry efforts to people struggling with homosexuality should consider the accuracy of the story, and the legitimate concerns it raises. Boy Erased raises three questions about accuracy. (1) Did the events in Conley’s book happen as he described them? (2) Does the film accurately represent the events described in the book? (3) Are the ministry and counseling practices described in the book and film really used by Christian counselors and ministry leaders in this field?

Conley’s account of the program’s policies and practices seem largely accurate. John Smid, the former director of Love in Action, confirmed in an interview that the program did employ restrictive policies. Participants were not allowed to converse with unapproved parties, dress codes were specific and rigid, most forms of secular music and literature were forbidden.[7] Life within the walls of Love in Action was, by all accounts, highly regimented.

One former participant even described attending it “like checking into a prison,”[8] and another past resident, gay entertainer Peterson Toscano, took his renunciation of the program on the road in a one-man show called “Doin’ Time In the Homo No Mo’ Halfway House.”[9]

Certainly, detractors from any group or ideology can inflate the wrongdoings of the people they criticize. But in this case, testimonies of dissatisfied former clients largely match that of the former director, so it’s a safe bet that much of what Conley, Toscano, and others say is true. The rigid policies detailed in the book and film did exist.

The basic storyline, too, should be taken at face value. Nineteen-year-old Garrard did confess his homosexuality to his Christian parents; they were referred to Love in Action; he did, with some ambivalence, agree to participate; and after nearly two weeks he did bolt from a group session, call his mother to get him out, and, along with her, later denounced both Love in Action and all other forms of Conversion Therapy.[10]

Yet the movie clearly took some liberties, veering from the book in some of its most dramatic, key moments. The director of Love in Action (a character based on Smid) is shown pushing a lapsed participant onto his knees in front of a coffin, representing his choice to die rather than live. His family members, invited to participate in the shaming ritual, are then instructed to literally beat the young man with a Bible, who is then subjected to being pushed underwater in a bathtub. In another scene, a sadistic staff member mocks Conley while he’s urinating, calling him a “faggot.” Later, the shamed young man who was beaten with a Bible commits suicide, and when Conley attempts to leave the program, he’s wrestled to the floor by staff members acting like prison guards.

None of this is included in Conley’s memoirs, so it’s another safe bet that they were added for dramatic license. We expect a filmmaker to embellish, but when embellishments appear in a movie claiming to be a real-life argument against a real-life problem, then they need to be pointed out and separated from the facts.

Yet most people who minister to those struggling with same-sex attractions will recognize neither themselves nor their work when viewing Boy Erased. Since most of us simply offer biblical guidance, listen, empathize and advise, the notion of cultlike group shaming and Bible beating is unthinkable. Indeed, when leaving the theater, I remarked to my wife, “If I did half the stuff they did in that movie, I’d pass laws banning myself!”

As war rages over the rightness or wrongness of homosexuality, rules of fairness and accuracy are suspended in lieu of victory at any cost. Thereby, advocates for a world in which no one objects to homosexuality have cleverly created a boogeyman and named it Conversion Therapy. Boy Erased tells us this is what the boogeyman looks like, that all people offering counsel or ministry from a traditional biblical position are doing what the boogeyman in the movie does, therefore all of “them” must be stopped.

When a ministry approach is wrong, the answer is to correct the wrong one without assuming all ministries in the same field are committing it. We could learn from the Salem Witch Trials,[11] the McCarthy hearings,[12] or the more recent epidemic of “Satanic Ritual Abuse” claims,[13] that when numerous people claim something (like the many who call themselves “survivors of Conversion Therapy”), that alone isn’t proof that the “something” exists.

Even the American Psychological Association, which holds a solidly pro-gay position, recognized this in its report on “Conversion Therapy” when it stated,

“Early and recent research studies provide no clear evidence of the prevalence of harmful outcomes among people who have undergone efforts to change their sexual orientation or the frequency of the occurrence of harm because no study to date of adequate scientific rigor has been explicitly designed to do so. Thus, we cannot conclude how likely it is that harm will occur from [sexual orientation change efforts].”[14]

Meanwhile, Garrard Conley claims to have begun praying again, though he’s not sure anymore to whom he is praying.[15] Our hope is that he comes to a clearer knowledge of the true God, and of His intentions for his life, intentions this former boy seems to have attempted to erase but that are, as always, indelible.

[5] “The Mattachine Society of Washington ‘Love in Action’ Collection, 2004,” The National Museum of American History, The Smithsonian Institute, http://americanhistory.si.edu/collections/search/object/siris_arc_388930.