Did Eve Have Sex with Satan? The Serpent Seed View of Genesis 3:15 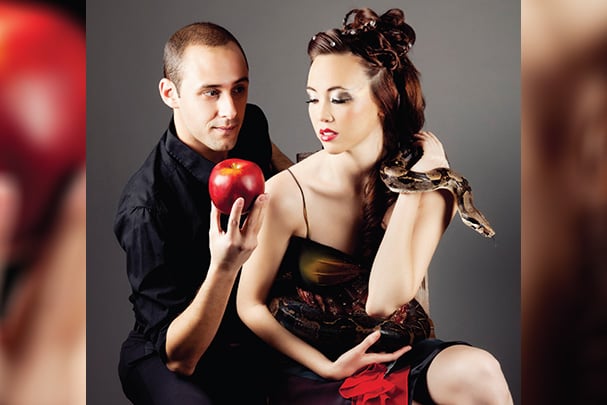 “Here is what really happened in the Garden of Eden. The Word says that Eve was beguiled by the serpent. She was actually seduced by the serpent….He was so close to being human that his seed could, and did mingle with that of the woman and cause her to conceive. When this happened, God cursed the serpent.” —William Branham1

Branham (1909–65), a proponent of Oneness theology,2 taught the so-called serpent seed interpretation of Genesis 3, with adherents of this view often citing Genesis 3:15 in support of their position: “And I will put enmity between you [the serpent] and the woman, and between your offspring and hers; he will crush your head, and you will strike his heel” (ESV).

The crux of the serpent seed view is that Eve and Satan engaged in sexual relations. Consequently, sin is viewed as sexual in nature, as opposed to the traditional interpretation of the fall as sin being disobedience to God. In addition to Branham, other serpent seed interpretations of Genesis 3:15 are found in the teachings of the Christian Identity movement, as well as, for instance, in the teachings of Arnold Murray (1929–2014) of Shepherd’s Chapel and also the Unification Church.

The Identity movement’s serpent seed interpretation clearly leads to racism, as one expert explains: “As early as the mid-1940s, Identity preachers were building a new doctrine: the Serpent Seed theory. It is a fairly simple and straightforward belief: Jews are the physical descendants of a sexual union between ‘Mother Eve’ and ‘the serpent’ (Gen. 3). The serpent is variously identified as either Satan, or a demonic representative of Satan. As such, Jews are literally ‘Children of the Devil.’ Most Identity believers claim the serpent was a physical manifestation of Satan himself.”3 Furthermore, Identity teachers add that Cain is the offspring of a union of the serpent and Eve, while Abel is said to be the result of the union of Adam and Eve.4

Even if the serpent seed doctrine does not overtly lead to racism, the interpretation remains problematic and unwarranted. Before exploring responses to the perspective and examining the biblical texts more closely, this article will first present how Genesis 3:15 is interpreted by supporters of the serpent seed teaching.

The Seduction. Branham explains, “He seduced her [Eve] and by her did Satan have a child vicariously. Cain bore the full spiritual characteristics of Satan and the animalistic (sensual, fleshly) characteristic of the serpent.”5

Some proponents of the serpent seed doctrine point to the word “beguiled” in Genesis 3:13 (KJV) as evidence of Eve being sexually seduced by the serpent. This requires the interpreter to suggest that “beguiled” in this context actually means sexually seduced. However, in contemporary translations, the Hebrew word that the King James renders as “beguiled” is often translated as “deceived” (ESV, NIV, HCSB, NLT) or “tricked” (NRSV, NET), while none of these translations render the word as “seduced” or imply sexual seduction. In short, “beguiled” means to charm, enchant, deceive, or trick. In context, Eve is blaming the serpent for tricking her into eating the fruit of the forbidden tree. She is not stating that the serpent seduced her sexually.

The Seed of Satan. In the King James Version, the first portion of Genesis 3:15 reads, “And I will put enmity between thee and the woman, and between thy seed and her seed.” The view that both seeds are literal has resulted in the serpent seed doctrine sometimes being called the “two seed” interpretation. Most modern translations render “seed” as “offspring,” while granting that the Hebrew word is “seed.” Whether the word is translated as “seed” or “offspring” is not crucial. The question in reference to the serpent seed view is, does this passage mean that Eve and the serpent (Satan) had sexual relations resulting in the birth of a child and, as a result, a line of human beings that are literal descendants of Satan?

This leads to a problematic theological assumption, namely, that it is possible for demons to manifest physical bodies, engage in sexual relations with humans, and produce offspring. However, strong biblical arguments can be made against such claims.7 For instance, in Luke 24:39, Jesus states that “a spirit does not have flesh and bones” (ESV). In any event, even if one believes that demons may engage in sexual intercourse with humans, it does not necessarily follow that the serpent seed interpretation is correct.

Disobedience. What are the hermeneutical errors present in the serpent seed interpretation? The primary error is that of eisegesis—reading into the biblical text what is not actually present within the text. There is nothing in Genesis 3:15 or the surrounding context to indicate the sin of the garden involved sexual relations between Eve and the serpent. In fact, other passages throughout the Bible clearly indicate that the sin in the garden had to do with disobedience to God, not sexual relations: “Scripture is clear that the first sin was not sexual but rather consisted of Adam’s disobedience to God’s command not to eat from the tree of the knowledge of good and evil ([Gen.] 2:16–17).”8 This point demonstrates at least two other principles of sound hermeneutics: (1) allow Scripture to interpret Scripture and (2) examine the entirety of biblical teaching on a subject rather than interpreting passages in isolation. A third overarching hermeneutical principle is context. Given the context of Genesis 3:15, as well as the context of the whole of Scripture, we learn that the passage in question underscores humanity’s proclivity toward sin and disobedience to God, not sexual relations with the serpent and the rise of a demonic line of humans. Finally, adherents of the serpent seed doctrine ignore more viable and clear interpretations of the passages in question.

Regarding the Christian Identity movement’s racist interpretation of the passage, R. Alan Streett lists several problems with the Identity movement’s serpent seed teaching: “First, Israel traces its origin to Jacob, not Abel, when the former’s name was changed to Israel. Second, Abraham, not Cain, is called the father of the Jews. Third, all must be born again. Fourth, Jesus reminded the woman of Samaria that ‘salvation is from the Jews’ (John 4:22).

Fifth, and most important, Jesus was a Jew from the tribe of Judah; thus, according to this theory, He would be the enemy, not the Son of God.”9

Genesis 3:15 as Protoevangelium. There is good reason for calling Genesis 3:15 the “Protoevangelium,” that is, the “first gospel” or first instance of the gospel in the Bible. Rather than teaching the serpent seed doctrine, the passage encapsulates the centrality of the gospel message: “It has traditionally been understood as pointing forward to the defeat of the serpent by a future descendant of the woman…This defeat is implied by the serpent’s being bruised in the head, which is more serious than the offspring of Eve being bruised in the heel. For this reason, v. 15 has been labeled the ‘Protoevangelium,’ the first announcement of the gospel.”10

The Apologetics Study Bible adds, “The language is figurative, indicating the life-and-death struggle between the adversary and the human family borne by the woman….[The passage refers] to the ongoing opposition to the people of God by their enemies and [predicts] the rise of a particular seed, Jesus Christ, who will destroy the serpent in the end (Rom. 16:20; Rev. 12:9–10).”11 Ultimately, Christ delivered the crushing blow to Satan via His sacrificial atonement and miraculous resurrection.

As to serpent seed interpretations that lead to racism, the Bible is clearly opposed to racist ideas: “There is neither Jew nor Greek, there is neither slave nor free, there is no male and female, for you are all one in Christ Jesus” (Gal. 3:28 ESV).

Finally, the serpent seed interpretation leads to a severe misunderstanding of the true nature of sin, which is that sin is essentially disobedience to the Holy Lord. The account of humanity’s downfall is tragic enough as plainly stated without having to sensationalize it with the unfounded view that Eve and Satan engaged in sexual relations. It is for these reasons that the serpent seed doctrine should be soundly rejected. —Robert Velarde