Living as a Christian in a TV-Dominated World 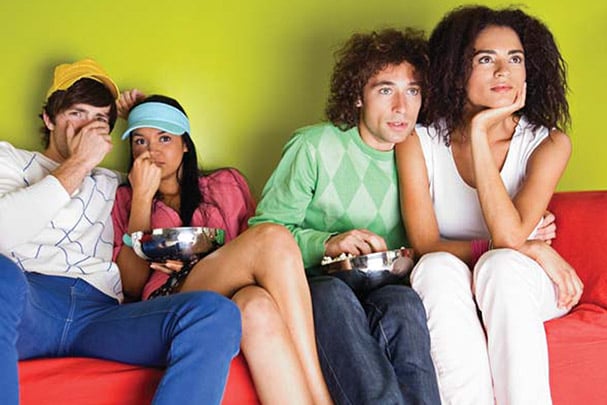 So…will you imagine a scene with me? Four Christians are sitting down to watch a popular TV drama. They are going to watch exactly the same program, on exactly the same set, in exactly the same room. And yet it is going to have four very different effects on them. Two of them are going to take significant steps forward in their walk with God. But two of them are going to go the other way. One of them will be aware of the presence of God as she watches. One will find that the TV sharpens his mind and enlivens it to think more deeply about living as a Christian in today’s world. One will switch his mind even more fully into the off position. And one, by the end of the program, will feel that God is even more distant than ever.

Artistic Expression. The first Christian is watching TV because she appreciates the creativity and artistry that is expressed on the screen. She understands that all good art is an expression of the creativity that God gave us when He made us in His image. She, like most people, knows that the first three words of the Bible are “In the beginning.” But unlike many others, she also recognizes the importance of the next two words—“God created.” That is, the very first thing we know about God is that He is creative. And so, as God’s image-bearers, she expects that creativity is fundamental to our human existence. And she believes that Christians should be particularly appreciative of art because we know the Artist.

But she also knows that we live in a world in which men and women have chosen to live without God. She believes that everything has been corrupted by the fall, and that includes our creativity. As she watches TV, she seeks to draw closer to God by discerning the good art and rejecting the bad. For her, “good” and “bad” art has nothing to do with individual taste or popular opinion; rather, good art expresses something of God’s goodness, whereas bad art typically blurs or even erases the boundary between good and evil.2 So, as she watches TV, she rejoices in the creativity and thanks God for all His good gifts, she prays for all artists, and she experiences something more of the presence of God.

Evangelistic Talking Points. The second Christian is watching TV because he wants to be more helpful to his friends as he shares his faith with them. He loves his friends, and he wants them to experience all the good things that God’s good creation has to offer. But he knows that many are not interested in hearing about his faith because their beliefs and values have been shaped in another way. And TV has played a significant part in that shaping process.

If he asks his friends what they believe about life, love, meaning, purpose, and truth—in fact, any of the big issues of life—he can see that their responses express ideas that have been reinforced, if not originated, by the TV programs they watch. He is aware that these ideas are not usually expressed explicitly on the surface of the program. They are mainly hidden in the underlying subtext of the program: in what is presented as normal and in what philosophers would call the assumed status of the ideas.

So, as he watches the TV, he is actively trying to identify the underlying subtext of the program. Looking beneath the surface, he seeks to find the assumptions that the program is reinforcing. He is endeavoring to work out the effect of such a program on the beliefs and values of his friends. And he is considering ways in which he might use examples from the program to help them to think again about the assumptions that they have absorbed. He realizes that this is not easy, so as he watches TV, he also is praying that God will sharpen his mind and enable him to think more deeply.

Mindless Distraction. The third Christian doesn’t really want to think at all. As far as he is concerned, Frank Lloyd Wright was correct when he described TV as “chewing gum for the eyes.” And that’s what he wants to do—to sit down for some mindless chewing in front of a screen. He wants something that will entertain him, something that will enable him to switch off his mind and relax. He doesn’t intend to think or pray or do anything at all. He watches TV because he wants to be amused. And that word describes what happens as he watches. Although we don’t quite know the derivation of the word, some say that it comes from two Greek words a and mousa, meaning literally without thinking; whereas others say that it comes from the ancient French a and muser, meaning literally to stupefy. Either way, the word indicates closing one’s mind.

But, whatever his mind is doing while he is watching TV, someone else’s mind has been working very hard. In fact, lots of minds have been engaged in creating the program that he is watching. The writers, producers, and directors all have thought very carefully about the ideas, beliefs, and values that this program expresses. And while this Christian has put critical thinking on hold in order to be amused, he is opening himself wide to absorbing those ideas, beliefs, and values. He is not discerning the good from the bad, the godly from the ungodly. He is simply letting the TV shape his mind, his heart, and his soul.

Indulging in Envy and Fantasy. The fourth Christian is thinking. Her mind is active. But she probably does not want other Christians to know her thoughts. She is watching TV because she wants to fantasize about the story it tells. She wants to imagine that she is living the life that she sees portrayed. She knows that this is not good. She knows that it is not actually helpful to her in her walk with God in the real world. She knows that what she is doing is the exact opposite of the prayer that Jesus gave. Jesus said, “Lead us not into temptation,” whereas she is willingly being led into temptation. She wants to push the boundaries, to move closer, to try more. For her, like the third Christian, watching TV is helping her to grow less like Jesus.

Engaged and Alert. I wonder which of these four Christians is most like you. Probably, if you are like most of us, then you are a mixture of all four. Sometimes we watch TV like one of these people, sometimes like another, and at other times, like two or more mixed together. We wrestle and struggle with following Christ in this TV-dominated world. And if we are serious about following Jesus, in becoming more like Him, then we will want that to be at the heart of everything we do, including any television that we watch.

Over the years, with friends and coworkers in my ministry, I have used a five-fold educational framework to help people engage with all forms of media. I invite people to ask aesthetic, emotional, intellectual, moral, and spiritual questions as they watch and, particularly, as they talk with others afterward about what they have seen.

First, aesthetic questions consider the media as a piece of art. Thinking about the storyline, scripting, characterization, editing, music, and design, we might ask which aspects stand out as particularly impressive or unimpressive, and how they fit together as a whole.

Second, emotional questions consider the emotional journey of the characters and the impact their story has on our own emotions as viewers. How does it make us feel, and what does it cause us to think about?

Third, intellectual questions explore the worldview that is embedded in the story. What explicit and implicit beliefs are being conveyed about subjects such as reality, humanity, knowledge, wisdom, and the deep desires and longings of the human heart?

Finally, as a climax, the spiritual questions bring it all together into one cohesive whole. What is the impact of the media on one’s beliefs, attitudes, and actions?

This approach to engaging with the media is appropriate for all people of all faiths. But crucially, I find it helps Christians to develop godly discernment as we live for Him in this TV-dominated world. —Nick Pollard

Nick Pollard is a popular inspirational speaker in the UK, much in demand for audiences ranging from army officers to Rotary groups, but always delighted to serve the church (www.nickandcarolpollard.org). He is probably best known for his popular book Evangelism Made Slightly Less Difficult (IVP, 1997).