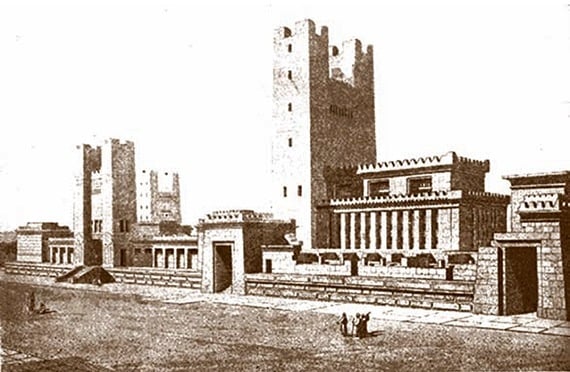 The book of Ezekiel closes with a vision of a temple and its associated rituals. In chapter 40, the prophet is transported in vision from his home among the exiles in Babylon to Israel, where a divine messenger holding a measuring rod appears to him. The messenger gives Ezekiel a tour of the temple, measuring the various walls, gates, and courts. At one point, the glory of the Lord, which was seen departing from the temple in an earlier vision (chap. 10), is seen returning to inhabit the temple (43:1–4).

The following chapters describe various sacrificial rituals performed by priests. Special attention is given to the role of one who is referred to as “the prince.” Near the end, a river is seen flowing out of the temple from under the threshold. The book closes with portions of the land assigned to various tribes.

Biblical scholars acknowledge that the temple vision, which occupies the last nine chapters of Ezekiel, presents special challenges in its interpretation. Some have even described it as the most difficult passage in the Old Testament.

As with the descriptions in Exodus of the tabernacle and its furnishings, many readers will find this section of Ezekiel tedious, due to its many arcane details, but this is not the greatest difficulty presented by these chapters. By far, the greater difficulty has to do with identifying the time and manner of the fulfillment of the vision.

Is It Solomon’s Temple? When Ezekiel saw the vision (573 BC), there was no temple standing in Jerusalem. Solomon’s temple, which had previously stood there, had been destroyed thirteen years earlier by Nebuchadnezzar, when he conquered Jerusalem and deported the citizens to Babylon. This means that Ezekiel was not seeing Solomon’s temple, or any temple that was actually standing at the time. What temple, then, was he shown?

Is It Zerubbabel’s Temple? Perhaps the answer that first comes to mind would be that this was the temple that came to be built, under the leadership of Zerubbabel, on the return of the Jews from Babylon to Jerusalem. However, this solution seems to be ruled out by the fact that Zerubbabel’s temple ended up being much smaller, and less elaborate, than the one Ezekiel describes. If Ezekiel was prophesying that the temple built by the returning exiles would fit this description, the prophecy failed to come true. This option does not commend itself to those who accept the inspiration of Scripture. Other interpretations, therefore, have been offered by evangelical scholars.

Is It the Church? Some Christian commentators have understood the content of these chapters as an apocalyptic vision, which is best interpreted spiritually. They point out that the church, in the New Testament, is often referred to as God’s “temple” or habitation. Each Christian is a “living stone” (1 Pet. 2:5), built, along with others, “upon the foundation of the apostles and prophets” (Eph. 2:20) into a “temple of God” (1 Cor. 3:16). On this view, the features of temple worship—priests, altars, sacrifices, blood rituals—would be seen as pertaining to spiritual, rather than literal, realities, and applied to our worship of God in the present time. In particular, the description of the river, in chapter 47, would seem to support a nonliteral interpretation. If this is the correct view, we would be required either to see many of the tedious details as being either superfluous or as corresponding to spiritual ideas that would be very difficult to identify with confidence.

Is It the Millennial Temple? Another view of this vision, commonly held among dispensationalists, is that Ezekiel’s temple will be established after the second coming of Christ and will serve as the worship center for all people during the “millennium.” On this view, the one described as “the prince” is often identified as Christ Himself, ruling over the millennial kingdom.

Choosing a Hermeneutical Strategy. In choosing among these options, we are compelled to decide between differing hermeneutical priorities. One of the chief hermeneutical principles recommended by dispensationalist scholars is that of maintaining a consistently literal interpretation. This would mean that “spiritualizing” the text must be seen as a departure from the most faithful handling of Scripture. Therefore, dispensationalists argue for a literal, physical building to be established in fulfillment of Ezekiel’s vision. Since the temple erected after Ezekiel’s time did not fit Ezekiel’s description, they believe that there must be another temple in the future that will do so more admirably.

It would be easier to accept this theory if we did not have the New Testament to guide our thinking. The most obvious problem presented here is that the book of Hebrews (e.g., 10:1–18) speaks of the death of Christ on the cross as a termination of the efficacy of bloody animal sacrifices, such as those Israel offered in the temple. If Ezekiel’s vision applies to a future time, why do we again find the offering of animal sacrifices?

The text of Ezekiel, however, seems to preclude this, since the various offerings in the temple are said to “make atonement for the house of Israel” (45:17).1 Thus, the sacrifices are presented as an atonement for sin, not as a memorial. Christ Himself recommended the use of wine and bread to commemorate His death (1 Cor. 11:24–26). Why would God replace this with animal sacrifices in which God never found any particular pleasure (Ps. 40:6; 51:16; Heb. 10:6)?

Further, Ezekiel says that “the prince” will offer a sin offering “for himself and for all the people” (45:22). If the prince is required to offer sacrifices for his own sins, this would militate against any theory that identifies him with Christ, who never sinned.

Other objections to the idea that Ezekiel’s vision describes a worship economy to be established in the future would include the following:

Literal Interpretation Is Not Always Best. While the difficulties of the dispensational interpretation seem insurmountable, its only strength lies in its hermeneutic of literal interpretation. There is another hermeneutic principle, however, that overrides literalism—namely, the superior revelation given in Christ.

Hebrews 1:1–3 affirms that, while God spoke to Israel through various prophets in the past, the revelation that has come through Christ is more comprehensive because He is no mere prophet, but “the brightness of [God’s] glory and the express image of His person.” The New Testament is not a mere appendix added to the writings of the Old Testament prophets. It is a revelation of the new order in Jesus Christ, in whom all previous revelation finds its fulfillment, and through whom all previous revelation must be understood.

Christ opened the understanding of His disciples so that they “might understand the [Old Testament] scriptures” (Luke 24:45). This being the case, it would be foolish for us to seek a meaning of the prophets contrary to that which Christ and the apostles taught. It is their witness that provides the strongest objections to any literalistic interpretation of Ezekiel 40–48. In Christ’s new order (which, unlike the old order, is permanent), the temple, priesthood, and sacrifices are likewise spiritual (1 Pet. 2:5).

Making Sense of the Vision. How then are we to understand the temple vision? First, one might reasonably refer to the vision as that which “might have been,” had the Jewish exiles in Babylon exhibited a more thorough repentance than they did. There is an indication that the realization of this vision in Israel’s future was contingent on the people being sufficiently ashamed, or repentant, of their past sins: “Son of man, describe the temple to the house of Israel, that they may be ashamed of their iniquities; and let them measure the pattern. And if they are ashamed of all that they have done, make known to them the design of the temple” (Ezek. 43:10–11).

The response of the Jews to their opportunity to return and to rebuild their temple was notoriously tepid. Only a small remnant opted even to return to Jerusalem, while the rest were content to remain in Babylon. As a result, the temple they built proved to be inferior to the one that Ezekiel described.

Though the Jews did not meet the conditions to have such a temple as Ezekiel’s, the pattern preserved in these chapters stands as a description of an intended order, which, had it materialized, would have testified, as the tabernacle once did, as a type and shadow of “heavenly things” (Heb. 8:5)—the new order in Jesus Christ. This, we may assume, was the long-term purpose served by the vision.

Though some features of the vision were probably intended symbolically from the start (e.g., the seemingly miraculous, ever-deepening river), it is probable that the temple and its rituals would have been literally instituted, as here described, had Israel met God’s conditions.

Whether or not the temple had ever actually been rebuilt, the new revelation in Christ encourages us to see its pattern as having been fulfilled in Jesus Christ Himself, who is the final atoning sacrifice and the eternal high priest of God’s people.

Steve Gregg is the author of Revelation: Four Views: A Parallel Commentary, and host of the radio show The Narrow Path (www.thenarrowpath.com). He lives in Temecula, California.