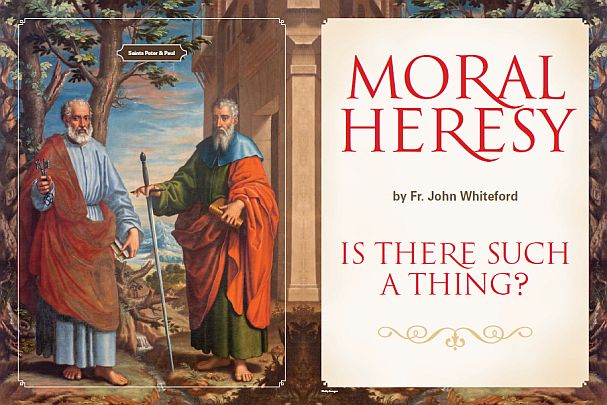 Among Christians who wish somehow to square the Christian faith with LGBTQ+ ideology, some have put forth the argument that there is a distinction between the moral teachings of the church and the dogmas of the faith, and that while the dogmas are unchangeable, the moral teachings are subject to revision based on changing social norms. But is there any basis for this in either Scripture or the Tradition of the historical church? Let’s consider the facts.

Does St. Paul affirm that moral teachings of the church are dogmas and doctrines? He most certainly does. To understand St. Paul’s teachings, we need to go back to the very first council of the church, the council of the apostles in Jerusalem, recorded in Acts 15. The question in dispute was to what extent ought gentiles be held to obey the Mosaic Law. On one side, there were those who argued that gentiles had to become Jews and live according to all the ceremonial and moral laws of Moses. However, the apostles said that gentiles were to be held instead to the basic laws God gave to Noah for all of mankind (see Gen. 9:1–17), and to the universal moral law of God, particularly with regard to sexual morality. They wrote to the gentile converts: “It seemed good to the Holy Spirit, and to us, to lay upon you no greater burden than these necessary things; that ye abstain from meats offered to idols, and from blood, and from things strangled, and from fornication: from which if ye keep yourselves, ye shall do well. Fare ye well” (Acts 15:28–29).1

Some will object that Christians do not observe what the apostles wrote with regard to eating the blood of animals, but while this is generally true of non-Orthodox Christians, it is not true of the Eastern Orthodox.2 And when the text speaks of “fornication,” the word is porneia (πορνεία), which refers to any sexual behavior that is immoral, and in the Jewish and Christian context, this means any sexual relations forbidden by the moral law of God as expressed in the Scriptures, including homosexual sex.3

So, is this decree of the apostles, that all Christians must refrain from sexual immorality, dogma? Well, the Scriptures say that this is exactly what it is. The apostles obviously did not publish their epistle in a periodical magazine or post it to their website. The way this epistle was disseminated to gentile converts was by people like St. Paul himself. We are told in the chapter immediately following the record of the council of Jerusalem that St. Paul and his companions delivered this epistle as they went on their next missionary journey: “As they went through the cities, they delivered to them for observance the decrees that were ordained by the apostles and elders which were at Jerusalem” (Acts 16:4).4 And what is the Greek text for “the decrees”? Ta dogmata (τὰ δόγματα); in other words, the dogmas.

St. Paul does, in fact, number sexual immorality (fornication) in general, and homosexual sex in particular, among things that are contrary to “sound doctrine”:

We know that the law is good if one uses it lawfully, knowing this: that the law is not made for a righteous person, but for the lawless and insubordinate, for the ungodly and for sinners, for the unholy and profane, for murderers of fathers and murderers of mothers, for manslayers, for fornicators, for sodomites [ἀρσενοκοίταις], for kidnappers, for liars, for perjurers, and if there is any other thing that is contrary to sound doctrine, according to the glorious gospel of the blessed God which was committed to my trust. (1 Tim. 1:8–11, emphasis added)5

If a sin is contrary to sound doctrine, then teaching that this sin was not actually a sin would obviously be heretical — the denial of a core teaching of the faith. Falling into a sin is sinful, but not heretical. However, teaching that a sin is not really a sin is both sinful and heretical. It is in fact a serious heresy because people cannot repent of a sin that they do not believe to be a sin, and this effectively shuts the doors of repentance in the face of sinners who are misled by this error.

A Moral Heresy Condemned by Christ Himself

One of the earliest heresies in the first-century church was the heresy of the Nicolaitans. In Christ’s epistles to the seven churches of Asia in the book of Revelation, after warning the Ephesians about their having lost their first love, He praised them on one count: “But this you have, that you hate the deeds of the Nicolaitans, which I also hate” (Rev. 2:6). Then, in His letter to the Church at Pergamos, He said: “I have a few things against you, because you have there those who hold the doctrine of Balaam, who taught Balak to put a stumbling block before the children of Israel, to eat things sacrificed to idols, and to commit sexual immorality. Thus, you also have those who hold the doctrine of the Nicolaitans, which thing I hate” (Rev. 2:14–15).

So, the first question is, did the Fathers of the church understand Christ to be speaking of a heresy, and was that heresy regarding their teachings on morality? St. Andrew of Caesarea (563–637) wrote what is indisputably the most authoritative Orthodox commentary on Revelation, and commenting on Revelation 2:6, he wrote: “Anyone who comes upon the works of the Nicolaitans, which are hated by God, will know their detested heresy” (emphasis added).6 Reading just the text of Revelation 2:14–15, you might think that here Christ is speaking of two different, though perhaps related, heresies, but in fact, “the doctrine of Balaam” is referenced directly with regard to the Nicolaitans:

So it seems this city [Pergamos] had possessed two difficulties: First, the majority was Greek [i.e., Pagan], and second, among those who were called believers, the shameful Nicolaitans had sown evil “tares among the wheat” [Matt. 13:24–30]. For this reason he recalled Balaam, saying who in Balaam taught Balak, through these words signifying that the Balaam of the mind, the devil, by means of the perceptible Balak, taught the stumbling block to the Israelites, fornication and idolatry. For by means of that pleasure they were thrown down into performing this to Beel-phegor [Baal of Peor, Num. 25].7

Oecumenius (who wrote around the late 6th or early 7th century) likewise sees the reference to Balaam as applying to the Nicolaitans, rather than to some other group in Pergamos.8

What else about the Nicolaitans can we find in the writings of the Fathers? St. Hippolytus of Rome (c. 170–235) wrote that this heresy originated with the deacon Nicolaus that we read about in Acts 6:5:

Nicolaus has been a cause of the wide-spread combination of these wicked men. He, as one of the seven (that were chosen) for the diaconate, was appointed by the Apostles. (But Nicolaus) departed from correct doctrine, and was in the habit of inculcating indifferency of both life and food. And when the disciples (of Nicolaus) continued to offer insult to the Holy Spirit, John reproved them in the Apocalypse as fornicators and eaters of things offered unto idols.9

The Nicolaitanes are the followers of that Nicolas who was one of the seven first ordained to the diaconate by the apostles. They lead lives of unrestrained indulgence. The character of these men is very plainly pointed out in the Apocalypse of John, [when they are represented] as teaching that it is a matter of indifference to practise adultery, and to eat things sacrificed to idols. Wherefore the Word has also spoken of them thus: “But this thou hast, that thou hatest the deeds of the Nicolaitanes, which I also hate.”10

Clement of Alexandria (150–215), on the other hand, excused Nicolaus himself and wrote that the heresy originated from a misunderstanding of the things Nicolaus taught:

Such also are those who say that they follow Nicolaus, quoting an adage of the man, which they pervert, “that the flesh must be abused.” But the worthy man showed that it was necessary to check pleasures and lusts, and by such training to waste away the impulses and propensities of the flesh. But they, abandoning themselves to pleasure like goats, as if insulting the body, lead a life of self-indulgence; not knowing that the body is wasted, being by nature subject to dissolution; while their soul is buried in the mire of vice; following as they do the teaching of pleasure itself, not of the apostolic man.11

And Eusebius of Caesarea (c. 260–c. 340) agreed with Clement on the origins of this heresy:

At this time the so-called sect of the Nicolaitans made its appearance and lasted for a very short time. Mention is made of it in the Apocalypse of John. They boasted that the author of their sect was Nicolaus, one of the deacons who, with Stephen, were appointed by the apostles for the purpose of ministering to the poor. Clement of Alexandria, in the third book of his Stromata, relates the following things concerning him. “They say that he had a beautiful wife, and after the ascension of the Saviour, being accused by the apostles of jealousy, he led her into their midst and gave permission to any one that wished to marry her. For they say that this was in accord with that saying of his, that one ought to abuse the flesh. And those that have followed his heresy, imitating blindly and foolishly that which was done and said, commit fornication without shame. But I understand that Nicolaus had to do with no other woman than her to whom he was married, and that, so far as his children are concerned, his daughters continued in a state of virginity until old age, and his son remained uncorrupt. If this is so, when he brought his wife, whom he jealously loved, into the midst of the apostles, he was evidently renouncing his passion; and when he used the expression, ‘to abuse the flesh,’ he was inculcating self-control in the face of those pleasures that are eagerly pursued. For I suppose that, in accordance with the command of the Saviour, he did not wish to serve two masters, pleasure and the Lord.”12

There is no doubt that the Nicolaitans were considered heretics and that their heresy consisted in teaching that it was acceptable for Christians to engage in sexual immorality and to eat meat sacrificed to idols — both things being specifically contrary to the dogmas of the Council of Jerusalem.

Thus, the Lord Jesus, His apostles, the Fathers, and the Councils all taught that moral teaching qualifies as unchangeable and unquestionable dogma. And yes, there have been moral heresies in the history of the church. There haven’t been many moral heresies because even heretics have generally not dared to challenge Christian morality, as it is so clearly taught in Scripture. But contemporary “Christian” LGBTQ+ are pushing a type of heresy that even most heretics would not have stooped to.

Fr. John Whiteford is the pastor of St. Jonah Orthodox Church (ROCOR) in Spring, Texas. He is the author of Sola Scriptura: An Orthodox Analysis of the Cornerstone of Reformation Theology (Conciliar Press, 1997) and the general editor of the St. Innocent Liturgical Calendar.