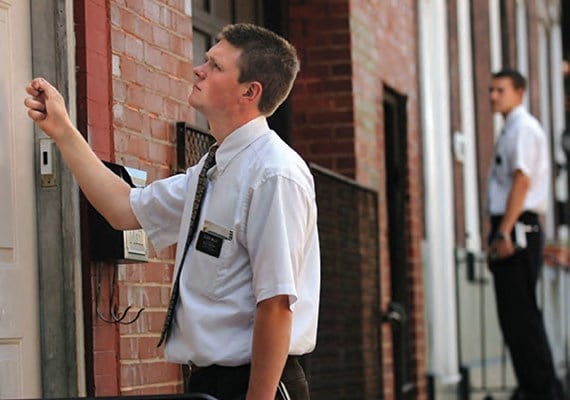 A doorstep encounter with missionaries from the Church of Jesus Christ of Latter-day Saints (Mormons) may allow only a brief moment to make a hopefully lasting impression, so we must weigh our words carefully. Too many Christians make the mistake of introducing peripheral topics that can sometimes move the discussion toward an agonizing dead end.

Many times Mormons are not familiar with their history or doctrines, allowing them sometimes to assume the Christian is either making something up or taking something out of context. But ask a Mormon, “If you were to die right now, do you have the assurance that all of your sins are forgiven?” The typical response is, inevitably, “I hope so,” “I think so,” or just plain, “No.” Why is this?

In Mormonism, salvation is defined in two unique ways. Tenth LDS President Joseph Fielding Smith explained, “Salvation is twofold: General—that which comes to all men irrespective of a belief (in this life) in Christ—and, Individual—that which man merits through his own acts through life and by obedience to the laws and ordinances of the gospel.”1 General salvation, or resurrection from the dead, is known as salvation by grace and is provided to all people. It is synonymous with immortality since the resurrected person lives forever.

The goal of a faithful Latter-day Saint is to achieve individual salvation or “exaltation,” which does not come easily. Thomas S. Monson, Mormonism’s current prophet, taught, “It is the celestial glory which we seek. It is in the presence of God we desire to dwell. It is a forever family in which we want membership. Such blessings must be earned.”2 With this as a background, we can then proceed to remind them regarding what those requirements really entail.

The Impossible Gospel. Using just six verses from two of the Standard Works3 and by asking a few questions, it’s possible to show how futile Mormonism’s plan of salvation really is. Bear in mind that these questions are asked within a context that a Mormon will understand.

1 Nephi 3:7: “For I know that the Lord giveth no commandments unto the children of men, save he shall prepare a way for them that they may accomplish the thing which he commandeth them.”

Ask: Does this passage say that it’s possible to keep all of God’s commandments? How are you doing at this?

Ask: Do you struggle with sin? If so, doesn’t this tend to prove that you, as a Mormon, are still “in your sins” and are “unclean”? If you are, doesn’t this mean you are not saved?

D and C 25:15: “Keep my commandments continually, and a crown of righteousness thou shalt receive. And except thou do this, where I am you cannot come.”

Ask: How many commandments must you keep continually? Some? Most? All?4 If all, how are you doing at this?

D and C 58:43: “By this ye may know if a man repenteth of his sins—behold, he will confess them and forsake them.”

Ask: How many sins must you forsake?5 Have you forsaken all of your sins? If not, doesn’t that mean you have not truly repented?

D and C 1:31: “For I the Lord cannot look upon sin with the least degree of allowance.”

Ask: In light of the answers you’ve given to the above questions, do you think God will overlook your sins?

Common Excuses. We like to utilize a book written by twelfth LDS President Spencer W. Kimball (1895–1985) called The Miracle of Forgiveness. This popular work, which has been in continuous print since 1969, has even been recommended for use by two general authorities speaking at General Conferences.6

Kimball insisted that “one of the most fallacious doctrines originated by Satan and propounded by man is that man is saved alone by the grace of God; that belief in Jesus Christ alone is all that is needed for salvation.”7 Stating that “forgiveness (is) cancelled on reversion to sin,” he wrote, “Those who feel that they can sin and be forgiven and then return to sin and be forgiven again and again must straighten out their thinking. Each previously forgiven sin is added to the new one and the whole gets to be a heavy load.”8 Kimball said that “God would never require anything from his children which was not for their benefit and which was not attainable. Perfection therefore is an achievable goal.”9

With these quotes in mind, consider several common excuses used by many Latter-day Saints and the response to such objections from this Mormon president.

“This is why we have repentance.” Spencer Kimball utilized D and C 58:43 when he wrote, “There is one crucial test of repentance. This is abandonment of sin. Providing that a person discontinues his sin with the right motives—because of a growing consciousness of the gravity of the sin and a willingness to comply with the laws of the Lord—he is genuinely repenting….In other words, it is not real repentance until one has abandoned the error of his way and started on a new path.”10 He later added, “The Lord cannot save men in their sins but only from their sins, and that only when they have shown true repentance.”11 The problem, of course, is that most Mormons realize they have not met such a demanding requirement; hence, they have not “truly repented” in the first place.

“But I’m trying” and “I’m doing the best I can.” Many Mormons like to believe that their honest efforts to do the right thing are enough to achieve forgiveness. Kimball did not think so. He wrote, “Nor is repentance complete when one merely tries to abandon sin. To try with a weakness of attitude and effort is to assure failure in the sense of Satan’s strong counteracting efforts. What is needed is resolute action.”12 He then related a story about a military officer who ordered a soldier to deliver a message. This officer became irritated when the soldier said he would try to carry out the order, even if it meant death. To this the officer replied, “I don’t want you to die, and I don’t want you merely to do the best you can, and I don’t want you to try. Now, the request is a reasonable one….Now get out of here and accomplish your mission.”13 Kimball concluded, “To ‘try’ is weak. To ‘do the best I can’ is not strong. We must always do better than we can.”14 Remind the Mormon that whenever a person uses the word “try,” it is almost always within the context of failure. For example, a person who climbs a hill will say he climbed the hill. He doesn’t say he “tried” to climb the hill.

The Freedom Found in Christ. The Bible contradicts the notion that we can earn God’s forgiveness. Grace by definition is unmerited and mercy by definition is undeserved. For example, Romans 3:28 says a person “is justified by faith without the deeds of the law,” while Galatians 2:16 adds that “by the works of the law shall no flesh be justified.”

It is important to stress that we are not minimizing the role of good works. While justification comes by grace through faith and not by works, Ephesians 2:10 clearly states that believers were created for good works. Our works are the evidence of our faith. When we realize that salvation comes through what Christ did on the cross, it no longer is about what we do but rather what He did. Unfortunately, Mormonism places an oppressive burden squarely on the backs of the LDS people.

Forgiveness of sins provides the Christian peace that passes all understanding. By using the approach we’ve presented here, you will be challenging the Mormon to explain why Christians should surrender their assurance of forgiveness for something that the Mormons only wish they had. —Bill McKeever and Eric Johnson

Bill McKeever is the founder of Mormonism Research Ministry (www.mrm.org), which he founded in 1979.

Eric Johnson is an MRM research associate. Together they coauthored Mormonism 101 (Baker, 2000).