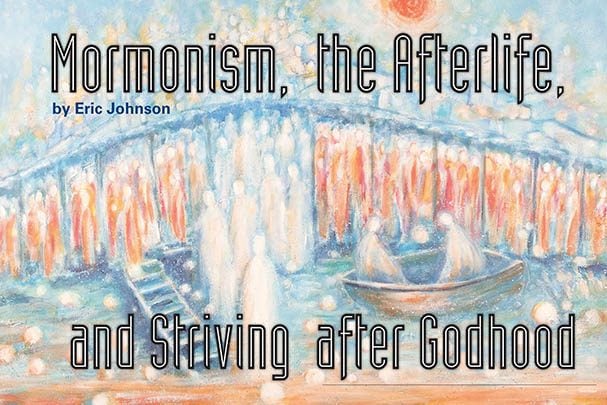 Most religions have clear teachings on what happens to a person after death. For example, Eastern philosophies such as Hinduism and Buddhism explain how one’s behavior in a previous life (karma) affects the next life. Muslims are supposed to observe the Five Pillars of Faith and Muhammad’s teachings in order to qualify for Paradise. Jehovah’s Witnesses are taught that only 144,000 people go to heaven, with the rest of the faithful membership filling Paradise Earth; those not worthy for either destination cease to exist. The teachings advocated by leaders of The Church of Jesus Christ of Latter-day Saints (hereafter LDS, or Mormon) have similarities with each of these religions. With that as our background, let’s take a closer look at Mormonism’s view of what happens after death.

LIFE BEFORE THIS EARTH

To understand Mormonism’s afterlife, it is vital to consider humanity’s “beforelife.” Mormon leaders have taught that all human beings once existed in a previous state as “spirit children,” born through a literal relationship between God the Father and a heavenly mother in the “preexistence” or “premortality.” This is also called the “first estate,” a place where billions of sprits (including you and me) had to choose between the proposals offered by Jesus Christ — God’s literal first-born spirit child and rightful heir — or another spirit son named Lucifer. One-third of humanity’s spirit brothers and sisters disobediently picked Lucifer’s plan. Therefore, these “sons of perdition” were cast out of the preexistence, never to be given a chance to receive physical bodies necessary to progress. Lucifer became humanity’s adversary known as Satan, while the disobedient spirits became demons. Their future eternal destination will be a place called outer darkness, which is very similar to the biblical destination of hell. According to the LDS scripture Doctrine and Covenants (D&C) 101:91 and 133:73, this is a place filled with “weeping, and wailing, and gnashing of teeth.”

Tenth president Joseph Fielding Smith taught that, while possible, it is unlikely for a human being to become a “son of perdition” because the person must “have known that Jesus Christ was the Son of God, have had the testimony of the Spirit of the Lord, the Holy Ghost, and these things have all been revealed so that they know they are true; and then they turn against them and fight them knowingly.”2 In other words, a person can receive Mormonism’s version of hell only by fully understanding the LDS gospel and still rebelling against the “true Church.” For ex-Mormons who have left this religion after once believing it to be true, outer darkness is a long shot, as a person needs to believe the LDS Church is true and still “fight” against it. All ex-Mormons I know would be disqualified because they now believe this church is not true.3 Those who have never been Mormons cannot be sent to outer darkness.4

Mormonism teaches that the souls of those who die go to a temporary place between mortality and immortality called the spirit world. Obedient Latter-day Saints will reside in paradise while the other souls will be in spirit prison. It is taught that the LDS gospel is brought to those in spirit prison and, if accepted, the saving ordinances can be delivered through vicarious work done for the dead by living Mormons in the more than 150 LDS temples located around the world. A church manual explains, “The people in the spirit world can exercise faith and accept the gospel message, but they cannot receive the ordinances of the gospel, such as baptism, the endowment, and sealings, for themselves. The Lord has directed us to perform these ordinances for them.”5 This is why genealogical work is so important for most Mormons, as “each of us can play a vital role in providing ordinances for the dead. We can identify those who have died and see that temple ordinances are performed in their behalf. As we serve those who wait in the spirit world, we can come to know the blessing of assisting the Savior in the great work of salvation.”6 During the future millennium, faithful Mormons will complete the search for every human who has ever lived. After the thousand years, the final judgment will take place, and souls will be sent to one of three kingdoms for eternity.

The least desirable is the telestial kingdom. According to D&C 76:81–84, those sent here “are they who received not the gospel of Christ, neither the testimony of Jesus. These are they who deny not the Holy Spirit. These are they who are thrust down to hell.” Even though the word is used in this passage, this is not hell in its traditional sense. One manual states, “You may need to explain that the ‘hell’ referred to in verses 84 and 106 is spirit prison, a temporary state between death and resurrection. Those in spirit prison who do not accept the gospel will eventually be resurrected and inherit telestial glory.”7

This state will not be “as wonderful as the celestial kingdom or the terrestrial kingdom.” In fact,

neither our Father in Heaven nor Jesus will visit those who live here. Angels will visit these people, and they will have the influence of the Holy Ghost. The people who live in the telestial kingdom are those who did not accept either the gospel or a testimony of Jesus, either on earth or in the spirit world. They will suffer for their own sins in spirit prison until after the Millennium. Then they will finally be resurrected. While on this earth, they were liars, thieves, murderers, false prophets, adulterers, and those who ridiculed sacred things. They were the people who accepted the beliefs of the world rather than the teachings of Jesus.8

Those who reach the terrestrial kingdom, meanwhile,

will not live with our Father in Heaven, and they will not have all He has. Those who go to the terrestrial kingdom will be honorable people. Some of them will be members of the Church, and others will not. They will be those who did not accept Jesus on earth but later accepted Him in the spirit world. The people who will live there will not be part of an eternal family but will live separately, without families.9

The grandest destination is the celestial kingdom where “exaltation,” or “eternal life,” takes place. A “lifetime” of good works is required: “Those in this kingdom will dwell forever in the presence of God the Father and His Son Jesus Christ. This should be your goal: to inherit celestial glory and to help others receive that great blessing as well. Such a goal is not achieved in one attempt; it is the result of a lifetime of righteousness and constancy of purpose.”10 Joseph Fielding Smith agreed, saying, “To enter the celestial and obtain exaltation it is necessary that the whole law be kept.”11 Though most Mormons hope for this kingdom, Smith added that “NOT HALF THE LATTERDAY SAINTS TO BE SAVED. There will not be such an overwhelming number of the Latter-day Saints who will get there.…if we save one-half of the Latter-day Saints, that is, with an exaltation in the celestial kingdom of God, we will be doing well.…there are laws and ordinances that we must keep; if we do not observe the law we cannot enter”12 (emphases in original).

Those not qualifying for the celestial kingdom will have regret and an “eternal punishment which will come to them in knowing that they might, if they had kept the commandments of the Lord, have returned to his presence as his sons and his daughters. This will be a torment to them, and in that sense it will be hell.”13 First Council of the Seventy member Milton R. Hunter explained, “Many Latter-day Saints will not attain the celestial glory because they did not abide by the commandments of God; therefore, they will be very unhappy because they did not gain celestial life which could have been theirs.”14 In other words, the place of no regret can be found only in the celestial kingdom, a place where most Latter-day Saints won’t be!

The benefits for those who qualify for this highest kingdom include:

The term eternal increase refers to the ability for these new gods and goddesses “to procreate the family unit throughout eternity. This our Father in heaven has power to do. His marriage partner is our mother in heaven. We are their spirit children, born to them in the bonds of celestial marriage.”16

People will be assigned to a kingdom for eternity; those in the lower two kingdoms can never progress. Twelfth president Spencer W. Kimball taught, “After a person has been assigned to his place in the kingdom, either in the telestial, the terrestrial, or the celestial, or to his exaltation, he will never advance from his assigned glory to another glory. That is eternal! That is why we must make our decisions early in life and why it is imperative that such decisions be right.”17

Earlier, I stated how Mormonism’s view of the afterlife borrows some aspects of theology from other religions. Consider how Hinduism’s doctrine of reincarnation teaches that one’s actions in a previous realm affect the next life. In Mormonism, choices made in the preexistence determine where and in which circumstances a person would be born; one’s actions on this Earth also have a direct effect on the next life. Just like in Islam, there are a number of duties that must be accomplished in order to attain the best eternal situation offered by the Mormon religion. These include baptism and confirmation, church attendance, marriage in a temple, and “enduring to the end.” Muslims and Mormons alike are both offered an afterlife that includes ongoing sexual relations, a certain draw for a number of adherents. And similar to Watchtower doctrine, Mormonism teaches that a literal hell does not exist. Even a person as evil as Adolph Hitler had his work done for him in the London temple; thus, this tyrant of tyrants is qualified to receive, at the very least, the telestial kingdom.18