Perspective Matters: Looking “At” vs. Looking “Along” A Review of Moral Combat: How Sex Divided American Christians and Fractured American Politics by R. Marie Griffith 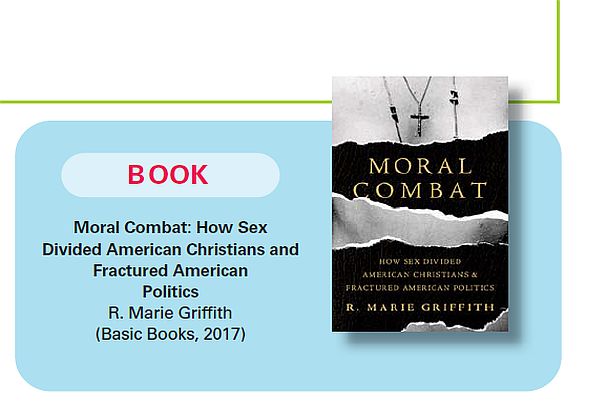 It’s no secret. We live in a society preoccupied with sex. It’s the headline that sells, the go-to in advertising, the expected culmination of every on-screen romance. It’s the adjudicator of pronouns, a means of introduction, and grounds on which to “swipe right.”

And in all of its fifty-plus shades of gray, sex has become a new symbol of freedom, justice, and equality, even as it deftly divides culture, families, and individuals.

In her Moral Combat: How Sex Divided American Christians and Fractured American Politics, R. Marie Griffith, director of the John C. Danforth Center on Religion and Politics at Washington University in St. Louis, highlights a messy departure from what was once a “Christian” consensus on sexual morality, and the resulting divides between religious groups, political parties, and the American people. With each shift, the rift grew between conservatives and progressives — the latter increasingly comfortable with changes they view as more inclusive. Conservative resistance to changes in social and legal norms governing sex and gender is motivated predominantly by fear.

In Griffith’s narrative, women’s suffrage forced the nation to look at gender roles in a new light. The stage was set for Margaret Sanger’s campaign to weave birth control into the social fabric of sexuality. To the degree that her work achieved that end and created fierce opposition, Sanger dragged sexual discourse from the private realm to the public. Birth control was a decisive break because its large-scale acceptance separated sex from reproduction. The door was wedged open for redefining sex and its uses.

Major decisions had to be made regarding sex in entertainment. Obscenity laws that were meant to protect were challenged, especially by artists sensitive to change in the air such as D. H. Lawrence with his Lady Chatterly’s Lover, and filmmakers depicting the physical aspect of love stories in the booming motion picture industry.

Biologist-turned-“sexologist” Alfred Kinsey’s infamous reports about the sexual activity of men and women — separate volumes released respectively in 1948 and 1953 — lit a fuse. Their reception in religious communities marked a decisive break between religious liberals who lauded him for his helpful insight and those committed to traditional views who lambasted him for trivializing and twisting what was sacred.

Through Kinsey, public discussion on sex and sexuality became frank and open, making way for the push for sex education in public schools, with Mary Calderone leading the charge. Battle lines were drawn between proponents who believed education about the sex act and contraception would prevent unplanned pregnancies and sexually transmitted diseases, and those convinced that sex couldn’t be taught devoid of worldview underpinnings and that attempting to do so would be akin to granting permission to young minds. A noted physician and public health advocate for sexual education, Calderone’s strategy to transplant sexuality within the purview of health rather than that of morality was met with deep resistance from the likes of the outspoken radio personality and editor of Christian Crusade, Billy James Hargis, whose impassioned campaign against sexual degeneracy gave a voice — however contentious — to conservative Christians. The marriage between what was viewed as private (religion) versus public (politics) gave rise to “the new Christian right” (p. 200).

To illustrate the breadth of the gulf within the church, Griffith centers the Roe v. Wade era on the Reverend Howard Moody and Catholics for Free Choice President Frances Kissling, both of whom viewed access to safe and legal abortion a moral necessity and opposition to that view the result of patriarchy run amok. While the Catholic Church and conservative Protestants planted their flag on the grounds that abortion actively kills innocent human beings, Moody and Kissling were immersed in worlds where women suffered without access to adequate education and healthcare. True to Griffith’s words, abortion remains a “brutally divisive religious and political issue” in which vast numbers of Americans are committed wholeheartedly to “moral viewpoints — feminist and progressive on one side, traditional conservative on the other” (239).

By the end of the twentieth century, the cultural tide began to shift yet again as sympathy mounted for the LGBT community. Nowhere was the division more contentious than in the church. When Episcopalians elected Gene Robinson, the first openly gay bishop, a push for full acceptance of LGBT lifestyles reverberated through the Protestant world and fractured denominations that drew lines in the sand. By the time Obergefell v. Hodges (June 2015 Supreme Court ruling that same-sex couples have the right to marry) was said and done, the Christian community was fighting battles within its ranks as well as without.

Griffith’s narrative is thoughtful, informative, and serves as a helpful analysis, especially her careful examination of the guiding motivations of revolutionaries such as Sanger, Calderone, Moody, and Robinson. Conservative Catholics and Protestants, however, will find that while she gives a nod to both churches’ sincere commitment to their respective traditions regarding sex and gender roles, her full representation of their views is, on the whole, uncharitable in comparison to those she champions from the other side and, on some counts, incomplete. In her pursuit to explain how sex broke America, she describes symptoms of what had already been percolating beneath the surface prior to the twentieth century. She looks at the issue and not along it, like C. S. Lewis’s sunbeam in his “Meditations in a Toolshed.” The perspectives provide two very different experiences. Looking along the issue, she might have delved deeper into clashing views on the nature of morality, as well as palpable shifts in the understanding of what it means to be human.

In her introduction, Griffith writes that Sanger and those who followed her acted on behalf of what they thought was best for America, and “all faced opposition from religious believers who saw their personal moral values and country under threat” (emphasis mine) (xx). Her portrayal of the Christian worldview, regardless of the individuals she chooses to represent it, is doomed from the get-go because she assumes that morality is a matter of personal preference.

Conservative Catholics and Protestants aren’t resisting a threat to their personal values; they are resisting challenges they understand to be objectively wrong and harmful. And while some reactions may have been motivated by fear, conservative resistance isn’t devoid of compassion. On the contrary, Christianity has maintained all along that sex is a good and joyful gift from God — one that has a specific teleology to unite husband and wife in a way that is naturally oriented to creating new life. The misuse or abuse of such a gift brings disastrous results. Indeed, from a thoughtful Christian’s perspective, to take a good gift and reshape it into something that it isn’t indicates contempt for the thing — not delight.

Sanger’s departure from the intrinsic nature of sex by the 1930s wasn’t surprising, given the prevalence at that time of Charles Darwin’s Origin of Species. Darwin’s work caught like wildfire during a time when scientific advancement was racing ahead and, consequently, those convinced we no longer needed God to explain reality checked out of organized religion in droves. His materialistic premise — that humans were nothing more than beasts with consciences — spread and succeeded in separating the physical from the spiritual. If humans are animals devoid of souls, then sex is merely biological. Contraceptives would enable the pursuit of pleasure without its natural biological possibility — pregnancy.

As the train barreled down the track toward cultural acceptance of casual sex, abortion, homosexuality, and gender fluidity, each step required further denial of biological reality. If the pursuit of sexual freedom means reducing the body to a mere machine used to suit the whims of personal preferences, it doesn’t come without costs. Our hypersexualized society, where individuals are encouraged to express themselves according to their passions in spite of their biology, still marginalizes whole segments of humanity — especially women and children, who are bought, sold, dehumanized, or disposed of to suit the passions of some. So-called sexual freedom doesn’t resemble freedom; it resembles bondage. The Bible has made that clear all along.

Griffith is correct when she concludes that it would be “naive to imagine that Americans in this standoff can return to any consensus regarding sex and gender and impossible to imagine what such a consensus could possibly look like” (321). There is no middle ground. It may be that so-called progress has it right. Fear-fueled or not, the resistance and warnings of conservative Christians may turn out to be void. According to Griffith, that’s been the case so far. But a single century is minuscule in the grand scheme of history. In 2018, sex reigns supreme, and yet individual quests for identity and meaning continue unresolved. Depression and anxiety are at an all-time high. To deny that sex is a contributing factor would be dishonest.

In his last published article, “We Have No ‘Right to Happiness,’” Lewis concludes:

Though the “right to happiness” is chiefly claimed for the sexual impulse, it seems to me impossible that the matter should stay there. The fatal principle, once allowed in that department, must sooner or later seep through our whole lives. We thus advance towards a state of society in which not only each man but every impulse in each man claims carte blanche. And then, though our technological skill may help us survive a little longer, our civilization will have died at heart, and will — one dare not even add “unfortunately” — be swept away.1

His words — looking along the issue — seem succinctly to summarize Griffith’s observations. Both perspectives offer truths. Which perspective is truer? Time will tell.