Revelation: It’s Grand Climax At Hand by the Watchtower Bible and Tract Society 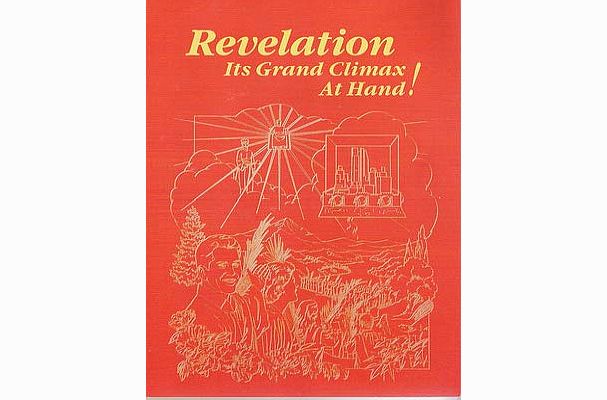 Revelation — Its Grand Climax at Hand!

The Watchtower Society’s latest com­mentary on the Book of Revelation repackages familiar Jehovah’s Witness interpretations in an attractive new format. Profusely illustrated with imagina­tive, full-color scenes from the Apocalypse, the new volume should be easy for Witnesses to sell in their door-to-door ministry. Confident of this, no doubt, they pro­duced a first printing in English of three million copies.

On page 9, the reader is told, “It is not claimed that the explanations in this pub­lication are infallible.” But on page 16, the publishers imply that they constitute “God’s channel for giving spiritual nour­ishment” whom Jesus uses “in unlocking the meaning of the prophecy.” And bap­tized Jehovah’s Witnesses know, of course, that they would be called before a “judi­cial committee” and “disfellowshipped” (formally expelled from the group and totally shunned by friends and relatives) if they were actually to reject any of the book’s “fallible” explanations.

While The Finished Mystery (an earlier Watchtower commentary on Revelation published in 1917) declared on page 15 that Christ Jesus was the one spoken of as “the Almighty” in Revelation 1:8, this new commentary repeatedly stresses the organization’s teaching that Jesus is a mere angel (143,148. 155, 181, 259, etc.), that the “holy spirit” is an impersonal force, and that the Father alone is God.

In harmony with this, page 36 features a box proudly pointing out that “In the songbook produced by Jehovah’s people in 1905, there were twice as many songs praising Jesus as there were songs praising Jehovah God…. But in the latest songbook of 1984, Jehovah is honored by four times as many songs as is Jesus.” Conveniently ignored is the biblical injunction that men should “honor the Son just as they honor the Father” (John 5:23; NIV).

Along similar lines the book says, “When Jesus presents himself by the title ‘the First and the Last,’ he is not claiming equality with Jehovah, the Grand Creator. He is using a title properly bestowed on him by God” (27). To “prove” this, a foot­note on the same page attempts to explain away a similar phrase in Isaiah referring to God: “In the original Hebrew at Isaiah 44:6, there is no definite article with the words ‘first’ and ‘last,’ whereas in Jesus’ description of himself in the original Greek at Revelation 1:17, the definite arti­cle is found. So, grammatically, Revelation 1:17 indicates a title, whereas Isaiah 44:6 describes Jehovah’s Godship.”

That this reasoning leads to a false dis­tinction, however, becomes obvious when Revelation 1:17 is compared with Revelation 22:13, which the Witnesses apply to Jehovah God. Both verses use the identical expression in Greek (ho protos kai ho eschatos — “The First and the Last”) with the definite article. In an apparent effort to avoid this fact, the Watchtower’s new book skips over Revelation 22:13 in its verse-by-verse commentary, discussing verses 12 and 14 without mentioning verse 13 at all. This appears to be the only signifi­cant verse the new Revelation book skips over without comment.

On page 125, the Society suggests that some Witnesses who died in earlier years “may be involved in the communicating of divine truths today.” This is reminiscent of their teaching in 1917 that the then-dead Pastor Russell was still running the organization from “beyond the veil” (The Finished Mystery, 144, 256). One can only wonder how such communications from the dead are supposedly received by Watchtower leaders who publicly repudi­ate spiritism and seances.

As earlier Watchtower commentaries have done, the new book explains much of Revelation as prophesying develop­ments within the Watchtower organiza­tion. Thus, seven angels blowing seven trumpets become seven annual Watchtower conventions held between 1922 and 1928: “The trumpet blast of the seventh angel was reflected in highlights of the Bible Students’ convention in Detroit, Michigan, July 30-August 6, 1928” (172). And even Isaiah’s reference to standing “upon the watchtower” (Isa. 21:8) points to the sect’s leadership today as it “uses the Watchtower magazine and other theocratic publications to sound abroad the news …”   (260).

While such “exegesis” appears laugh­able to outsiders, it is received with deadly seriousness by Jehovah’s Witnesses, who are not allowed to read anything else.