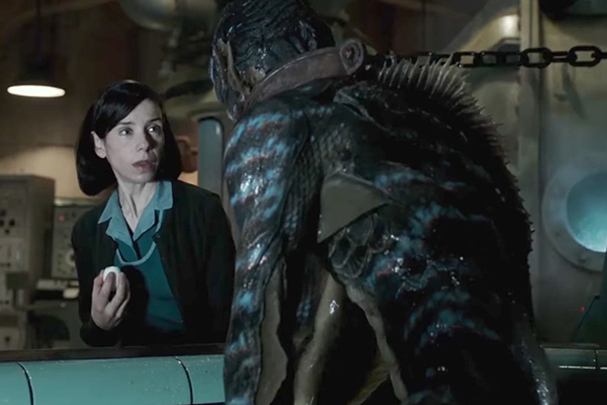 A movie review of
The Shape of Water
Directed by Guillermo del Toro
(Rated R, 2017)

In The Shape of Water, Mexican writer-director Guillermo del Toro blends a wide variety of sources — from fairy tales to classic Hollywood movies to the Bible — to tell an original and unusual love story about a humanoid fishlike monster and a woman who works as a janitor in the secret government laboratory where the fish-man is being held captive. While del Toro is undeniably pushing a secular progressive agenda, he uses Christian stories and imagery. Surprisingly, he ends up getting a lot of the gospel right.

Set in 1962, The Shape of Water takes place against the backdrop of the Cold War and the Civil Rights movement. Del Toro paints a picture of a divided America in which straight White Christian men are considered the norm, and all “deviants” who fail to conform to the mainstream standard are marginalized. It is the kind of America many conservatives look back on with nostalgia but to which progressives bid good riddance, hoping for a more egalitarian future. The film’s heroine Elisa Esposito (played by Sally Hawkins) is disabled. She is mute and so literally has no voice, making her a symbol of the marginalized and powerless. Del Toro surrounds Elisa with other metaphorically voiceless characters: women, African Americans, homosexuals, manual laborers, and foreigners. (He seems to think of artists and scientists as oppressed categories, too.)

With lovely photography, stylized production design, and whimsical music, The Shape of Water is clearly intended as a fairy tale or a fable. The story has echoes of The Little Mermaid and Beauty and the Beast but also classic Hollywood monster movies. But this is a fairy tale for adults. Viewers should be warned that there is plenty of R-rated nudity and squirm-inducing, horror-style gore.

Del Toro is essentially updating the story of The Creature from the Black Lagoon for the Black Lives Matter era. In both The Shape of Water and The Creature from the Black Lagoon, an unnamed fish-man Creature is found in the Amazonian jungle where the natives worship him as a “god”.  In both films, the Creature is captured by American explorers, and brought back to the United States to be studied. (In The Shape of Water, the Creature is to be weaponized and used against the Russians.) In both films, the Creature eventually escapes and kidnaps a woman. The parallels are obvious. But whereas the original Hollywood film followed the White male scientists as its heroes, this version is told from the point of view of the woman and imagines that she was not kidnapped but in fact fell in love with the monster and helped him escape. Thus del Toro’s Creature is more like Frankenstein’s monster than a dangerous villain. The Creature is simply lonely and misunderstood; he just wants to be loved.

Del Toro pushes our sympathy with the monster as far as he can, even going so far as to portray him as a symbolical Christ figure along the lines of Spielberg’s E.T.:  someone who comes to Earth from another world, who has the power to perform miracles, who is misunderstood and persecuted, and who dies and rises again to save his friends. In fact, the Creature in The Shape of Water is even more Christian than E.T. He has a dual nature — truly man and truly fish.  (Don’t forget that the fish is a symbol of Christianity.)

Moreover, the Creature, like Christ, graciously loves and accepts society’s outcasts. The film’s pharisaical bad guy (Col. Richard Strickland, played by Michael Shannon) is a fixated with external appearances and is always careful to follow the letter of the law (or “protocol” as he calls it). He believes he can earn his salvation and be rewarded with a Norman Rockwell family — two kids who idolize him, a dutiful wife, a house in the suburbs, and a shiny new Cadillac. He is haunted, however, by the need to measure up to his image of perfect manhood. He worries that even one mistake could preclude him from achieving the American dream.

As a lapsed Catholic, del Toro may or may not be aware of the way that his story parallels the New Testament theme of grace versus the law, but there is no doubt that he wants us to be critical of Col. Strickland’s brand of legalistic Christianity. Strickland has a very limited view of what God is like. He knows that God made mankind in His image, but he erroneously concludes from this that God must also be in the image of a man. He thinks not only that God looks like a man but also that the image of God comes in degrees so that an able-bodied White man looks more like God than a woman, a Black person, or a disabled person does. This might be an unfair caricature of “male-headship” theology, but it is worth honestly searching our consciences about ways we, too, define “normal” as “like us” and assume that God must live up to our dominant cultural images of normality.

Many viewers will be uncomfortable with the portrayal of a sexual relationship between a human woman and a non-human Creature. It wouldn’t be a stretch to interpret this inter-species romance as approving of bestiality, which some see as a logical consequence of progressive sexual ethics that normalizes homosexuality and other forms of nonprocreative sex. On the other hand, we don’t typically react this way to the story of Beauty and the Beast. We shouldn’t forget that The Shape of Water is a fairy tale; we’re not meant to take it as entirely literal.

Still, the explicit sexuality of the film might make it difficult to recognize the Creature as a symbol of Christian grace. There is, however, a long tradition of interpreting the biblical poem Song of Songs as a symbolic expression of the love between God and His chosen people. If a love poem about Solomon and one of his wives can be a symbol of the love between Christ and His church, then perhaps a fairy tale romance between an outcast woman and the fish who loves her unconditionally can also be a symbol of the gospel — especially when this romantic relationship is placed in the context of legalistic religion.

In the final analysis, Del Toro has given us a picture of Christian grace strong enough to critique his own progressive agenda. Legalism is something that cuts both ways. We all need grace to save us from trying to measure up to our image of external perfection and public approval, whether our normative vision is family-values conservativism or progressive political correctness. In a culture where someone can become a social outcast for making one public mistake on social media, we all need to know that God loves us, forgives us, and welcomes us into His family, even though we invariably fail to be perfect. —John McAteer