The Hidden Agenda of the Blue Parakeet 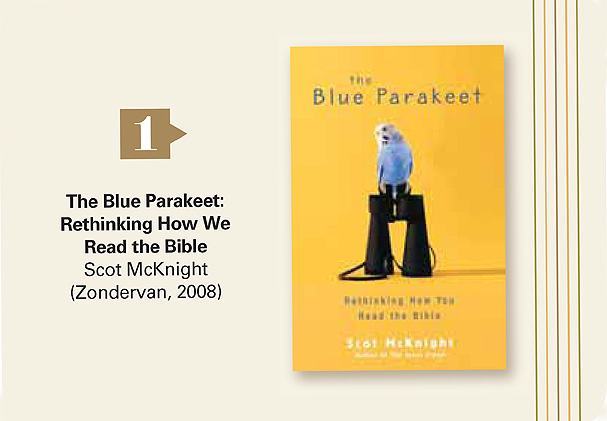 If you are looking for a book that will help you get more out of your Bible reading, Scot McKnight’s The Blue Parakeet: Rethinking How You Read the Bible, despite its subtitle, is not what you are looking for. It is not that McKnight does not talk a lot about how we read Scripture, he does. Aside from the emerg ent, missional language, and the “modern generation” style of the discussion, however, there is little “new” in what he has to say that has not been said much more clearly and helpfully in more “traditional works.”1

The biggest problem with The Blue Parakeet, however, is that it has a hidden agenda. It uses the widely relevant “hook” of how we are to read Scripture as a cover for its ardent promotion of egalitarianism (“mutualism,” as McKnight puts it) over the course of a number of chapters. Though McKnight refers to his discussion of women in ministry as a “test case,” the reality is that it takes over as the central thesis of the book, leaving the reader more than a bit confused, and surely not helped, by the time one reaches the end of the book.

The odd title comes from McKnight’s observation of an escaped pet, a blue parakeet, finding its way into his yard among the many sparrows that are his regular guests. The idea is that the blue parakeet interrupted their normal experience and provided a startling, jarring invasion. So this phrase becomes a symbol of jarring, unexpected, challenging verses, at least as McKnight interprets them, which expose our less-than-robust ways of reading the Bible. He uses the imagery in other ways, as well, later referring to women gifted for ministry as “blue parakeets” that are locked in a cage by “traditionalists” and forbidden to sing.

McKnight, a professor at North Park University in Chicago and author of The Jesus Creed, uses a plethora of “Bible difficulties” to raise one basic issue and to illustrate one basic point: we do not do everything the Bible says. He insists no one can, since, in reality, the Bible requires us to adopt a pattern of “discernment” that is based on reading the Bible “with the Great Tradition” but not in a traditionalistic way. He brings us to this conclusion slowly, and rather circuitously, raising all sorts of issues about the Sabbath, various Old Testament laws, and New Testament historical situations.

From here he promotes part of his thesis: “that was then, this is now.” The theme becomes tiring in its repetitiveness. Almost every element of redemptive history, law and gospel, shadow and fulfillment, is put into the category of “that was then, this is now,” as if this simplistic phrase can actually account for the rich development of God’s revelation over the course of the Scriptures. McKnight knows well the in-depth treatments of these issues that have been part of Christian literature and history, but he prefers to simplify the situation so that he can get to his main point, his “case study” of women in ministry.

McKnight creates an overarching paradigm of unity restored in Jesus that becomes the foundation of his real purpose in writing The Blue Parakeet. In the process he presents a truncated rendition of the “story” that is Scripture that does injustice to the richness of the biblical narrative. As Thomas Schreiner has noted in this regard, “At the same time, his own hermeneutical method is not very helpful. To say ‘that was then and this is now,’ and that we need a pattern of discernment as we are led by the Spirit in community is insufficient. How McKnight’s program works out is remarkably vague and amorphous.”2

No Authority, No Submission. McKnight’s vague and amorphous answers to his own difficult questions are among most troubling aspects of this book. Those looking for answers to the many attacks on the Christian faith prevalent in Western society today will find little help from The Blue Parakeet. Their confidence in the Bible’s ability to provide guidance will not likely be increased but rather decreased by McKnight’s perspectives.

McKnight often gives vent to the sentiments that power the writings of many Emergent authors, reacting to a childhood defined by a stilted, narrow, often hypocritical fundamentalism. But the existence of shallow, unreflective fundamentalism does not logically justify a paradigm shift that allows him to write that those who “have a proper relationship to the Bible never need to speak of the Bible as their authority nor do they speak of their submission to the Bible. They are so in tune with God, so in love with him, that the word ‘authority’ is swallowed up in loving God” (emphasis in original).3

Though the Bible contains just this kind of language of submission and authority, McKnight’s view of the Bible as “story” and “narrative,” and his imbalanced view of what a true “relationship” with God entails, forces this odd viewpoint into his theology. The nature of Scripture as breathed out by God and man’s recognition of his created state cannot but produce categories of authority and submission, but McKnight, in forcing his paradigm of “unity” on Scripture, squeezes this vital aspect of biblical revelation right out of the “story.”

Egalitarian Agenda. I began by asserting that The Blue Parakeet was in essence guilty of false advertising, for while it presents itself as a dialogue on how we should read the Bible today, it is far more an apologetic for egalitarianism and an attack on comple ment arianism. Though McKnight raises all sorts of issues (often under cutting biblical authority in the process), it is just here that he reveals his true motivation. The chapters on this “case study” are filled with strong language; stronger, I think, than McKnight even recognizes. His prose conveys emotion and the reserve that often expresses itself elsewhere in the book is pretty much lost here. This results in some pretty glaring inaccuracies and imbalances, some of which might not be readily apparent to the untrained eye.

Just one example must suffice to substantiate this charge. In discussing the issue of whether Junia is a woman’s name in Romans 16:7 (a very common point of discussion in the complement arian/egalitarian debate), McKnight not only dismisses with prejudice one of the key complementarian arguments (that, as Dan Wallace4 has pointed out, the phrase “of note among the apostles” is best understood as “well known among,” removing this text from a central position in the debate to begin with) but he makes this kind of blanket statement: “Junia is a woman’s name. But because women aren’t supposed to be ‘apostles,’ someone copying the letter to the Romans changed the spelling so that Junia (female) became Junias (male)….Recent exhaustive study has uncovered this mistake, and we now are virtually certain ‘Junia’ was a female.”5

How does McKnight know the intentions and beliefs of ancient scribes? While it is common enough for modern textual scholars to engage in time-traveling mind-reading today, neither McKnight, nor anyone else, can tell us with any certainty what any particular unknown and unnamed scribe believed in the ancient world. In fact, both sources cited in McKnight’s notes indicate that the situation is significantly more complex and nuanced than his discussion indicates.6 The reality is that nobody changed any spelling at all. The difference between Junia and Junias is a matter of accenting, and the earliest manuscripts do not have accent marks. Hence, McKnight’s assertion that this text was changed “because women aren’t supposed to be ‘apostles’” evaporates on examination, as does much of his larger argument.

McKnight confesses to not having tried to end the “abuse” of the “caged blue parakeets” (i.e., women he insists were called to ministry) when he was teaching at Trinity Evangelical Divinity School. This entire book seems, to this reviewer, to be some kind of cathartic exercise for having failed to engage the battle.

Paradigm vs. Primary Example. Even more telling than this is a rather glaring observation, shared by other reviewers of this work. All through The Blue Parakeet we are told that the paradigmatic phrase we need to understand is “that was then, this is now.” This is what all Christians are left with, “discerning,” with the Great Tradition of the Church, how we are to read the Bible in our own cultural setting. One would therefore expect that in McKnight’s main test case, that of women in ministry, we would see his thesis proven; yet, just the opposite happens. Instead of “that was then, this is now,” we have a completely different argument, for McKnight asserts that women have always had these positions of leadership. So, McKnight’s argument should rather be: “it was like this back then, and it should be again now.”

We see then that McKnight’s own paradigm does not fit his primary example. This again leads us to conclude that the preceding discussion about reading the Bible was just a vehicle to allow him to present a case for what he calls “mutualism,” but which is really nothing more than standard egalitarianism in more emergent language.

Scot McKnight raises all sorts of valid and important questions in The Blue Parakeet, but like Peter Enns in his Inspiration and Incarnation: Evangelicals and the Problem of the Old Testament,7 the reader is left with more questions than answers at the end of the “discussion.” This is the mark of many of today’s writers. The “dialogue” is far more important than actually coming to any conclusions. Yet, given that we are talking about God’s revelation to man and a faith that proclaims Jesus Christ to be “the way, the truth, and the life” (John 14:6), who provides His followers with everything they need “for life and godliness” (2 Pet. 1:3), shouldn’t that conversation end with something like “Thus sayeth the Lord”?

James White is an elder of the Phoenix Reformed Baptist Church, the Director of Alpha and Omega Ministries, and the author of more than twenty books. He has taught in a wide variety of theological fields and has engaged in more than seventy-five moderated public debates in defense of the Christian faith.

4 Dan Wallace, “Innovations in the Text and Translation of the NET Bible, New Testament,” in The Bible Translator 52.3:343–44.