Missing the Signposts: A Review of Astrophysics for People in a Hurry by Neil DeGrasse Tyson 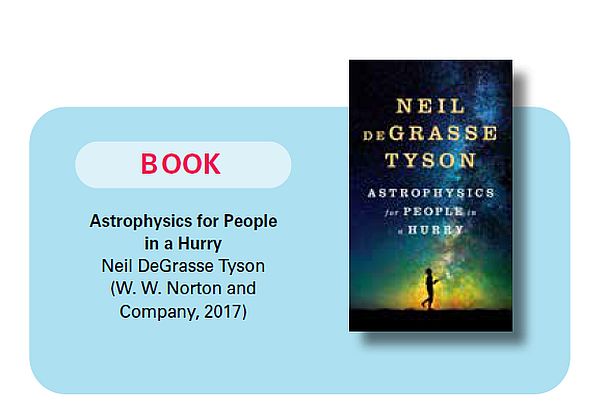 Astrophysics for People in a Hurry

Astrophysics for People in a Hurry indeed fits its title. The book is small enough to fit into a (large) pocket or purse, measuring only 7½ by 4½ inches, and it is short enough to read over a weekend (222 pages). The retail price of $18.95 seems a bit steep considering its size and its absence of illustrations and tables — quite an omission for a book on such a complex topic!

There’s another possible reason for buyers’ remorse. Readers familiar with Neil DeGrasse Tyson’s previous writings will have déjà vu. The chapters in this book are adapted from some of the many essays he published in Natural History magazine between 1997 and 2007, though they are updated with a few recent discoveries. For example, on page 96, he mentions the historic discovery of gravity waves in 2016, a century after Einstein predicted them.

Tyson apparently intends this to be the typical reader’s first and last book on astrophysics. Tyson writes at a level that anyone with a high school reading level should be able to understand, but from my perusal of online reviews, it seems many readers have found it a difficult slog. On another note, he, too, neglects to include a bibliography and while footnotes are present, they are sparse; the first one to include a citation to the astrophysical literature doesn’t appear until page 55. The reader has to take almost everything Tyson has to say on his authority.

The first few chapters follow a chronological sequence covering the history of the universe, but the remaining chapters are not as well organized. Topics include the universality of physical laws, the cosmic microwave background radiation, dark matter, dark energy, the periodic table of the elements, the solar system, and exoplanets. These are all topics covered in a college Astronomy 101 course, but with accompanying equations and less flowery prose. I would think that an English major with a little writing prowess and an “A” from my ASTRO 100 course could write a book like this (with a generous nod to Wikipedia!).

I don’t have any qualms with the scientific content of the book (except for its endorsement of Darwinism), as it is just a summary compilation of the current consensus among astrophysicists. If Tyson were content merely with this task, then I would be done with my review at this point. Luckily, he is a very opinionated writer, which, in my opinion, makes for a much more interesting discussion. Thus, the remainder of my review concerns the worldview content Tyson pours into the scientific discoveries (as well as relevant facts he does not!).

Materialist Intentions. The first three words in the English Bible are In the beginning. These are also the three words Tyson chooses to start his book. The titles of the next two chapters, “On Earth as in the Heavens” and “Let There Be Light,” are also biblical allusions. By themselves, these snippets don’t tell us whether Tyson approves of the biblical worldview. He’s just being cute and culturally literate.

Tyson telegraphs his true intentions on the first page, where he quotes Lucretius, an influential Greek materialist who lived more than two thousand years ago. The knowledgeable reader will suspect that any biblical allusions are in fact a literary device that Tyson employs to subtly reinterpret biblical ideas into a materialist framework. In this way, he is following in the footsteps of his mentor, Carl Sagan.

Sagan began his PBS Cosmos series (and book of the same title) with the statement, “The Cosmos is all that is or ever was or ever will be.” To Christian ears, this should have a familiar ring. It is a remaking of the Gloria Patri (“Glory be the Father”), “As it was in the beginning, is now and ever shall be,” in the image of materialism. In Sagan’s world, as in Tyson’s, there is neither need nor room for God, and in each case readers know, or at least suspect, as much from the very first page.

I do have to give Tyson credit for acknowledging something he probably feels uncomfortable about. He writes, “What we do know, and what we can assert without further hesitation, is that the universe had a beginning” (33). He disdains the idea of a Creator, remarking, “Some religious people assert, with a tinge of righteousness, that something must have started it all” (32, emphasis in original). Actually, it is not something but someone. Some of these unnamed religious people he so cavalierly dismisses include scientific luminaries such as Allan Sandage and Charles Townes, as well as leading philosophers such as William Lane Craig and Alvin Plantiga. He goes on to contradict himself, speculating that maybe the universe was always there, or just popped into existence out of nothing, or is just a computer simulation. After admitting that these are not very satisfactory explanations, Tyson pleads ignorance on the subject.

On this, Tyson echoes the views of Robert Jastrow. In the 2004 Illustra Media documentary The Privileged Planet (in the “Extra Interviews” section), when asked about the meaning of the Big Bang, Jastrow admits that he feels conflicted. He is committed to reductionist materialism — the view that only the material world (matter) is truly real — yet the obvious logical implication of the beginning to the universe calls into question that belief system.

Christian readers will notice Tyson’s lack of acknowledgment of the deep faith of the great early modern scientists. The most glaring instance takes place at the start of Chapter 2 where he introduces Isaac Newton and his universal law of gravitation. He not only fails to mention Newton’s Christian faith but also makes the following absurd claim: “According to Christian teachings of the day, God controlled the heavens, rendering them unknowable to our feeble mortal minds.” Tyson flips history on its head! In reality, Christian scientists believed they were justified in studying the heavens because they were created in God’s image and were gifted with the ability to reason; they also believed that the great Lawgiver governed His creation with physical laws, which they enthusiastically set out to discover. Atheists, like Tyson, have no such convictions.

Tyson’s Morals. In the final chapter, titled “Reflections on the Cosmic Perspective,” Tyson engages in a bit of moralizing. He attempts to extract meaning from the facts about our cosmic place and heritage while clutching tightly to his materialism. Yet, he must know that without God, there is no purpose to existence, and there is no meaning to our lives. Our actions are neither moral nor immoral. There is only matter in motion. Although, Tyson would probably say that people can create their own moral system and live by it without positing God, to which one might still query, “But who then will be trusted to enforce this arbitrary system?”

Tyson states, “People kill and get killed in the name of someone else’s conception of God, and that some people who do not kill in the name of God, kill in the name of needs or wants of political dogma” (195). Notice that he lists killing in the name of God first and keeps the descriptions general. If he wanted to be fair with the historical data of the past century, then he would list killings by atheistic Marxist governments first. Furthermore, he would not broad-brush all people of faith as potential killers but he would note that Christians and Jews have been the most frequent targets. I take this as a big piece of Tyson’s motivation for rejecting belief in God.

Tyson naïvely believes that giving people a cosmic perspective will end our bad behavior. He writes, “Now imagine a world in which everyone…holds an expanded view of our place in the cosmos. With that perspective, our problems would shrink — or never arise at all — and we could celebrate our earthly differences while shunning the behavior of our predecessors who slaughtered one another because of them” (197). Germany was one of the most scientifically advanced nations on the planet in the 1930s, especially in the physical sciences. That didn’t stop Hitler and his willing executioners from committing atrocities on a massive scale.

False Humility. In his attempt to show that we are insignificant in the cosmic scheme, Tyson warmly embraces the discredited
Copernican Principle (my use of the label that by definition purports that humans are not privileged observers of the universe). He writes, “Again and again across the centuries, cosmic discoveries have demoted our self-image” (204). He then lists the supposed demotions of Earth, then the sun, then the Milky Way. He even calls this cosmic perspective “spiritual…but not religious” (206).

Dennis Danielson masterfully deconstructs this dethronement narrative in an important paper he published in 2001. He writes,

But the trick of this supposed dethronement is that, while purportedly rendering “Man” less cosmically and metaphysically important, it actually enthrones us modern “scientific” humans in all our enlightened superiority. It declares, in effect, “We’re truly very special because we’ve shown that we’re not so special.” By equating anthropocentrism with the now unarguably disreputable belief in geocentrism, such modern ideology manages to treat as nugatory or naïve the legitimate and burning question of whether Earth or Earth’s inhabitants may indeed be cosmically special. Instead it offers — if anything at all — a specialness that is cast in exclusively existential or Promethean terms, with humankind lifting itself up by its own bootstraps and heroically, though in the end pointlessly, defying the universal silence.1 (emphasis added)

One wonders if Danielson had Tyson in mind when he wrote this. Tyson writes, “I feel alive and spirited and connected. I also feel large, knowing that the goings-on within the three-pound human brain are what enabled us to figure out our place in the universe” (198).

Missing Signposts. On page 171, Tyson briefly describes an interesting fact: “Earth’s Moon is about 1/400th the diameter of the Sun, but it is also 1/400th as far from us, making the Sun and the Moon the same size on the sky — a coincidence not shared by any other planet–moon combination in the solar system, allowing for uniquely photogenic total solar eclipses.” I believe this “coincidence” is actually evidence of design, as I detail in The Privileged Planet.

Tyson is a smart person, but he is letting his materialist blinders keep him from seeing the signposts in nature that point to its author. So blinded was he that he failed to see even the signposts in his own book. —Guillermo Gonzalez

Guillermo Gonzalez is an astronomer at Ball State University. He is coauthor, with Jay W. Richards, of The Privileged Planet: How Our Place in the Cosmos Is Designed for Discovery (Regnery, 2004).