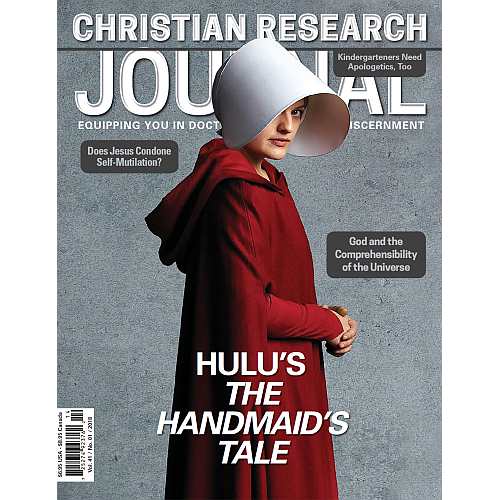 04 From the Editor
Women and Apologetics

10Seeing Red: The Handmaid’s Tale, Human Dignity, and Hope
by Megan Almon
Cultural Discernment and Ethical Apologetics: Many feminists see the warped value system portrayed in Hulu’s The Handmaid’s Tale as a reflection of Christian and social conservative ideologies. In reality, the dominant secular worldview, with its idolization of sexual freedom and rejection of intrinsic human dignity, fosters in the actual world the very oppression seen in the series.

18A Grand Cosmic Resonance: How the Structure and Comprehensibility of the Universe Reveal a Mindful Maker
by Melissa Cain Travis
Philosophical Apologetics: There is a mysterious resonance among the structure of the material world, the abstract world of mathematics, and the human mind. This three-part
harmony has major implications for the contemporary debate between materialism and theism. The sciences alone, however, are insufficient to illuminate this enigma.

26 Kindergarteners Need Apologetics, Too: How to Teach Them What They Need to Know
by Natasha Crain
Practical Apologetics: As our world becomes increasingly hostile toward Christianity, it’s likely that even elementaryaged children will be subject to a host of anti-Christian sentiments. As soon as kids are able to hear the gospel, they’re ready to start learning about evidence and reasons for their faith.

40 Abortion and the Moral Law
by Steven Braatz
Ethical Apologetics: Everyone is naturally aware of a standard beyond themselves that determines right behavior because the moral law is “written” on our hearts. No wonder having an abortion is such a very difficult thing for a woman to do.

46 Something Made: The Role of Form in Apologetics
by Corey Latta
Philosophical Apologetics: As C. S. Lewis understood well, the more penetrating and memorable instances of apologetic defense are those with harmony between idea and form. The apologist, like the writer, must become a rhetorical craftsman, careful about how she’ll say what needs saying.

54 Reviews
A Summary Critique:Max Tegmark’s Life 3.0: Being Human in the Age of Artificial Intelligence…Franklin Foer’s World without Mind: The Existential Threat of Big Tech

62 Ask Hank
Is Islam a Religion of Peace?