Out of the Ashes at Ground Zero 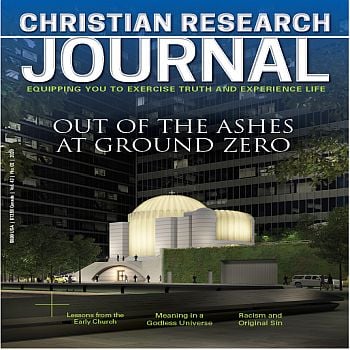 04 Taking the Only True and Transformational Faith Seriously

Today’s Religious Movements (From the President): The recent reversion of Hagia Sophia into a mosque symbolizes the reality that Islamic Turkey takes their religion more seriously than does the Christian West. The rebuilding of the Saint Nicholas Greek Orthodox Church at Ground Zero, modeled after Hagia Sophia, provides hope that Christians in the West may once again take the only true and transformational faith as seriously as Turkey takes the Islamic counterfeit.

How Do We Evangelize Affluent Suburbs?

10 Symbolic Immortality Projects Can’t Save You

Contemporary Apologetics: All people, whether they acknowledge it or not, are terrified by the prospect of death. People try to transcend their deaths by engaging in “symbolic immortality projects” — including having children, creating something of lasting value, and social activism. But such projects cannot save. Only the gospel of Jesus Christ offers us real eternal life.

Historical Theology:  Long before Christianity became a dominant political power, it was a divine movement of God. Long before Christianity found a comfortable home in church buildings, it was an active body of passionate believers. Indeed, the earliest followers of Christ were a divinely energized body of revolutionaries equipped to change the world, and today’s church can learn from their example.

Historical Apologetics (Effective Evangelism): Modern Christians must combat the same myth charged to the medieval believer: that faith is born out of stupidity and ignorance. From medieval apologists we can learn an integrated approach to evangelism, including the use of imagination combined with sound reason and historical evidence — and above all, profound reliance on the Holy Spirit.

24 There Is No Health in Us: Wellness and Self-Care in the Age of COVID-19

According to the World Health Organization, health and wellness entail “complete physical, mental, and social well-being” and “the realisation of the fullest potential of an individual.” This ideal manifests in our society as a Rousseauian brand of self-love. The remedy for a commitment to “self” that ultimately separates us from God forever is to let it go and walk in the way of the cross.

30 Scientific Materialist Manifesto: The Pursuit of Meaning in a Godless Universe

Philosophical Apologetics: Despite their philosophical naturalist perspective, theoretical physicists Sean Carroll and Brian Greene go to great rhetorical lengths to reassure their readers that meaning, purpose, and morality can still be had by short-lived organisms destined to dissolve into a universe that is itself bounding toward oblivion. However, their project fails miserably.

by Paul A. Nelson

Summary Critique: According to Neil Shubin, evolution was not intended by anyone to bring about anything. Evolution happened, and here we are. But the 19thcentury presupposition that design just isn’t science — whatever the evidence shows — turns science into what may be, at day’s end, a fruitless quest.

40  All Have Not Sinned in Every Way: Racism and Original Sin

Theological Discernment (Viewpoint): In her bestselling book, White Fragility, Robin DiAngelo contends that all white people are intrinsically racist. The Christian world has imbibed this narrative, and the claim is often defended by appeal to the doctrine of original sin. But the church must consider racism biblically.

How Does Free Will Affect Faith?

Out of the Ashes at Ground Zero Contents include:
● From the President: “Taking the Only True and Transformational Faith Seriously,” Hank Hanegraaff
● “Lessons for Today’s Church from the Life of the Early Church,” by J. Warner Wallace
● “Symbolic Immortality Projects Can’t Save You,” by Clay Jones
● “There Is No Health in Us: Wellness and Self-Care in the Age of Coronavirus,” by Anne Kennedy
● “Medieval Christians and Evangelism,” by Nicole Howe
● “Plenty of Details — But Not What We Really Need to Understand Evolution”: A Summary Critique of
Neil Shubin’s Some Assembly Required: Decoding Four Billion Years of Life, from Ancient Fossils to DNA,
by Paul Nelson
● “The Scientific Materialist Manifesto: The Pursuit of Meaning in a Godless Universe,” by Melissa Cain Travis
● Viewpoint: “Does the Doctrine of Original Sin Imply That All White People Are Racists?” by Matthew Kennedy
● Effective Evangelism: “How Do We Evangelize Affluent Suburbs?” by Ashley Hales
● Ask Hank: “How Does Free Will Affect Faith?”