“He Descended to Hell”: An Investigation of the Harrowing of Hell in the Apostles’ Creed 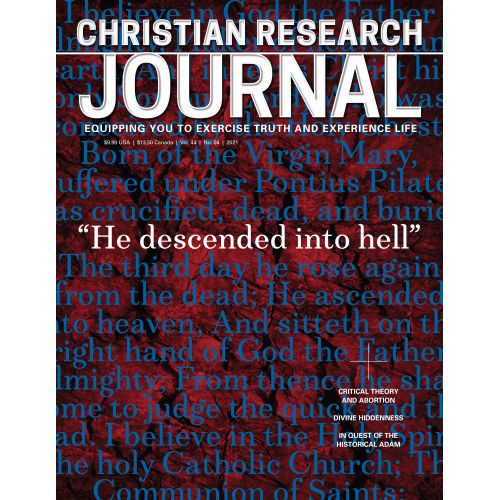 Bearing Witness to Christ Among Internationals

10 “He Descended to Hell”: An Investigation of the Harrowing of Hell in the Apostles’ Creed

Did Jesus really descend into hell between His death and resurrection, as the Apostles’ Creed states? Should this clause be dropped from the creed, or does it faithfully interpret Scripture? Understanding the formation of the Apostles’ Creed, the descent clause, and the history of its interpretation will help readers decide for themselves.

16 Critical Theory and Abortion as an Act of Oppression

Critical theory (CT) maintains that oppressed groups should be liberated from their oppressors. As well, according to CT, women determine the value of their unborn by their own conceptualizations. Thus, through abortion women arbitrarily exercise power over and oppress their unborn. Based on CT’s own internal logic, abortion should be construed as immoral.

Skeptics complain that if God really loved us, He would make His existence and presence unmistakable. Yet, for us to have a robust free will, there must be an amount of divine hiddenness or “epistemic distance.” God gives us enough evidence of His existence that those who want to worship Him will have their beliefs justified, but not so much evidence that those who don’t want to worship Him will be compelled to feign loyalty.

Should Christians make New Year’s resolutions? Are there any guiding biblical principles that might inform and shape such a task? In making and fulfilling resolutions, one must discern whether the effort is an attempt to redeem oneself apart from the person and work of Christ.

32 Who Was Adam? (Summary Critique of William Lane Craig’s In Quest of the Historical Adam)

Philosopher and Christian apologist William Lane Craig’s latest work is an impressive, bold interdisciplinary exploration into the historicity of Adam (and Eve). Yet Craig’s theological and scientific conclusions — Adam and Eve lived between 750,000 and 1,000,000 years ago as members of the hominin species Homo heidelbergensis — are unlikely to be accepted by many theologically conservative Christians.

It may strike some as odd to refer to God as a “hypothesis.” While God is an object of religious devotion, the existence of a personal and transcendent designer is the best explanation for the scientific evidence of the origin and fine-tuning of the universe and the origin and development of life.