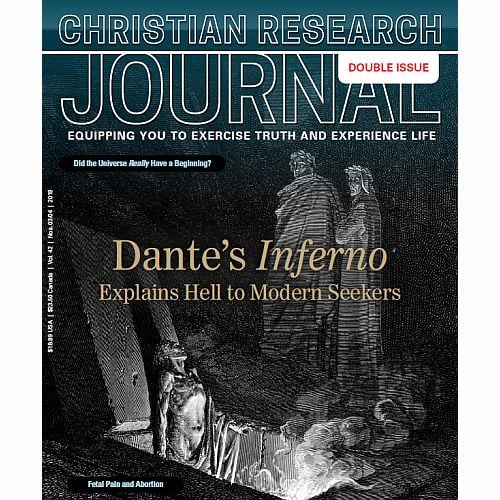 Cultural Apologetics/Historical Theology: In the Inferno, Dante lays out principles about hell that have the power to speak to modern seekers who might not otherwise read a Bible or go to church. Counter to our intuitions, Dante depicts sinners as eager to enter the inferno, for hell promises to give them exactly what they want: their sin and themselves forever.

14 God the Author: The Christian Imagination and the Problem of Horrendous Evil

Cultural/Philosophical Apologetics: Our God-given creative powers help us to make sense of the meaning of our lives. However, the excessive suffering that many endure challenges the picture of moment-to-moment cosmic beauty. By looking backward to the cross and forward to the hope of heavenly healing, we find the face of the person who can restore meaning to our stories and bring them to a good end.

22 What’s Pain Got to Do with It? Why Arguments over Fetal Pain Capability Ultimately Miss the Mark in the Abortion Debate

Ethical Apologetics The pro-life argument isn’t that it is wrong to intentionally kill fetuses because they are capable of experiencing pain. Abortion is wrong because it intentionally kills innocent human beings. Even so, unborn babies as early as 20 weeks may feel pain more intensely than newborns or adults.

Historical Theology (Philosophers Series): John Chrysostom was the greatest preacher in the early church, and all historic Christians still honor his accomplishments. His work exemplifies the enduring principle that theology must always be biblical because Scripture is the primary source of Christian truth.

32 Did the Universe Really Have a Beginning?

Scientific Apologetics: Because questions remain about the earliest moments of the universe, scientists offer speculative
alternatives to our universe having an actual beginning. Nevertheless, the science that is known to be true not only provides abundant evidence that the universe came into being a finite time ago, but also that the origin of the universe gives support for the biblical record and the biblical God.

40 Christian Apologetics in a Nutshell

General Apologetics: Mastering and tying together several strands of argument, the apologist employs reason and evidence in defense of Christianity as objectively true, compellingly reasonable, and pertinent to the whole of life. Following Jesus, the apologist must be a person of Christian integrity and love in order to make the gospel attractive.

Cultural/Philosophical Apologetics: At the end of his career, science fiction master Philip K. Dick wrote many stories that incorporated the mystical and gestured toward the theological. His work raises questions about personhood and moral truth that encourage readers to look beyond our material world for humanity’s ultimate truth and value.

56 John of Damascus and His Defense of Icons

by Nathan A. Jacobs

Historical/Philosophical Theology (Philosophers Series): John of Damascus argued that honoring images of Christand the saints is in keeping with Scripture and Tradition — and the Council of Nicea II (AD 787) agreed. Because of the Incarnation, creatures can serve as conduits for divine energy and grace; as creatures in whom God’s energy and grace reside, they are rightly honored.

62 The Golden Rule: Evidence for Christianity over Competing Worldviews and Religions

Philosophical Apologetics: In The expression, “Do to others what you would want others to do to you,” is one of the most well-known ethical principles. While most Christians understand the Golden Rule only as a principle in ethics, it can serve as strong evidence for the veracity of Christianity.

72 Christianity and the Origins of Hospitals and Modern Medicine

Practical Apologetics: The seeds that produced the modern hospital and modern medicine were planted by devout Christians who were motivated by their sincere Christian beliefs.

What Is the Central Mystery of the Church?